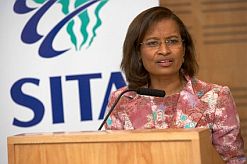 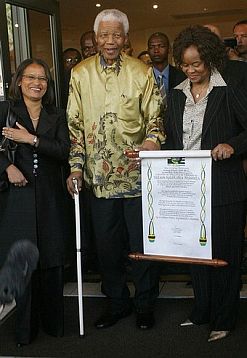 Fraser-Moleketi, left, with former president
Nelson Mandela and Tshwane mayor Gwen
Ramokgopa, right, on the occasion of
Mandela receiving the freedom of the city
of Tshwane.
(Image: Nelson Mandela Foundation)

Former South African Minister of Public Service and Administration Geraldine Fraser-Moleketi has been appointed to the top position of democratic governance director in the United Nations Development Programme’s Bureau for Development Policy.

Fraser-Moleketi assumed her new duties on 2 January 2009 after serving her country for 14 years at the highest levels of government. She tendered her resignation as Minister of Public Service and Administration in September 2008 when the ruling African National Congress (ANC) ordered former president Thabo Mbeki to step down. Mbeki resigned from office on 21 September, the day after he received the ANC directive.

Fraser-Moleketi was one of 14 resignations from Cabinet at the time. These included 11 ministers and three deputy ministers, one of whom was her husband, Deputy Minister of Finance Jabu Moleketi.

The UNDP is the global development arm of the United Nations and is committed to enabling positive change and a better life for people by making knowledge, experience and resources available in developing nations. The organisation is active in 166 countries, working with them to find their own solutions to the challenges of the modern world.

Fraser-Moleketi joins the global organisation at the level of assistant secretary-general. She said that she felt the need to step back and work on a global scale with the skills and competencies she had gained.

“I am confident in the democratic processes in the country,” she said. “I will still contribute from wherever I am as a patriot.”

Geraldine Fraser-Moleketi was born in Cape Town and even at school she showed an aptitude for leadership roles, serving on the Students Representative Council.

After matriculating she took up studies for a diploma in teaching at the University of the Western Cape, a period during which she also became active in community matters as a member of the active role in the Bellville Association for Community Action. She never completed the course, as she left South Africa in her second year of studying to go into exile in Zimbabwe as a member of the ANC.

In exile Fraser-Moleketi joined Umkhonto we Sizwe, the ANC’s military wing, and received basic military training in Angola. She received specialised training in the former USSR and in Cuba and was for a time seconded to the Lutheran World Federation.

Her return to South Africa came in July 1990 at the request of the South African Communist Party (SACP) after it was unbanned in February that year. Fraser-Moleketi helped set up the party’s first national office, holding the position of SACP national administrator and acting as personal assistant to Joe Slovo and Chris Hani, successive General Secretaries.

She was appointed Minister of Welfare and Population Development in July 1996 and Minister for Public Service and Administration in June 1999. Fraser-Moleketi has used her influential position to fight for gender equality in government and society, and has led South African delegations to Commonwealth Women Minister’s meetings, as well as chairing the Pan African Conference on Women’s Development, Equality and Peace in Rwanda.

In 1995 she was the deputy leader of the South African delegation to the Fourth World Conference on Women in Beijing, China. She also led a study tour to Australia and Uganda, which subsequently played a big role in the establishment of the Office of the Status of Women in the Office of the Deputy President.

Fraser-Moleketi has published a number of works on public administration, and has delivered numerous papers at both national and international conferences on social development, gender quality and transformation of public services.

She serves in several other capacities, including Deputy Chair of the United Nations Committee of Experts on Public Administration since 2006, and has been patron of the Free and Open Source Software for Africa, a cause she firmly believes in, since 2007. Other humanitarian roles have included chair of The President’s Award, which has as its patron-in-chief Nelson Mandela, sole patron of the National Eisteddfod Academy, trustee of the Nelson Mandela Children’s Fund, and patron of DaimlerChrysler’s Toys for Africa Project.

She was awarded an honorary professorship by Stellenbosch University and a fellowship to the Institute of Politics at the Kennedy School of Government.