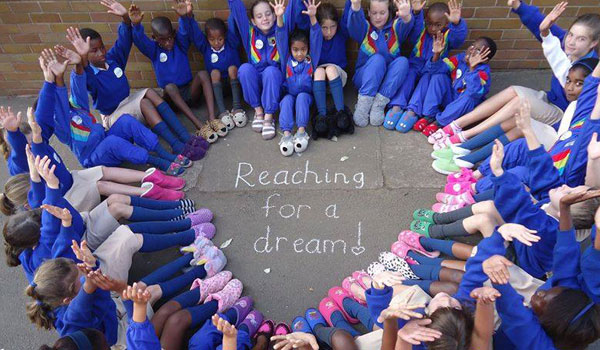 For more than 26 years, the Reach for a Dream Foundation has brought hope and joy to severely ill South African children. The foundation, a non-profit organisation, believes in the power of dreams and in encouraging children to use their dreams to fight their life-threatening illnesses. It seeks as far as possible to make these children’s dreams come true. (Image: Reach for a Dream)

For more than 26 years, the Reach for a Dream Foundation has brought hope and joy to severely ill South African children. The foundation, a non-profit organisation, believes in the power of dreams and in encouraging children to use their dreams to fight their life-threatening illnesses. It seeks as far as possible to make these children’s dreams come true.

It fulfils the dreams and ambitions of children between the ages of three and 18 years who have been diagnosed with terrible sickness. Children from all income groups are helped, and there is no discrimination of any race, colour, culture, creed or financial status. Life-threatening illness includes, for example, all forms of cancer, blood disorders, cystic fibrosis, and kidney failure, among many others.

The organisation does not refer to the children as terminally ill or dying. It rather uses the term “life-threatening” because many of the children do survive their illness – possibly as a result of the “power of their dreams”.

It believes that no child should live without hope. Childhood can be the most magical time of life, filled with dreams, aspirations and most of all, fun. Unfortunately for many children with a life-threatening illness, the magic of childhood may be lost in the emotional, physical and financial strain of dealing with their illness. The foundation tries to alleviate some of this strain, which often affects the whole family, by creating a different environment for the child – one that is not focused on her or his illness. It would like the children to find their laughter again and therein find the strength to live beyond their illnesses.

But there are some parameters: Reach for a Dream fulfils dreams that in no way pose any threat or harm to these already compromised children. Also, rather than fulfilling dreams for financial assistance, educational support or medical assistance, it encourages the children to stretch their imaginations and dream beyond their greatest expectations.

Reach for a Dream Foundation

In addition to fulfilling individual dreams, the foundation works on projects with groups of sick children. On such event is “Queen for a Day”, during which the foundation spoils young girls lavishly for a day. There is also “Captain Courage”, on which young boys are taken to do activities that they enjoy, such as deep sea fishing and on helicopter rides. For those who are able to be away from home or hospital, there are weekend camps for large groups of children called “Camp Sunshine”. For those who are too sick to leave hospital, there are clown entertainers called “Jabulani” who visit the children in hospital.

The inspiration to start Reach for a Dream came from an article on the American group, Make – A – Wish Foundation. Owen Parnell, a former president of the Randburg Rotary Club, was struck by the opportunity to establish a similar venture in South Africa. On 7 July 1988, the organisation made its very first dream come true. And so the journey of dream fulfilment began. Its first dreamer, JC Steinman, was treated to a wonderful birthday party with rides on a pony and a motorcycle.

Officially named the Reach for a Dream Foundation in 1991, the organisation defined its core purpose as “fulfilling the dreams of children of any race, colour and creed between the ages of three and 18 faced with a life-threatening illness”. It truly believes that it is contributing to creating the future of this country: if you can beat a life-threatening illness as a child, imagine what you can achieve as an adult.