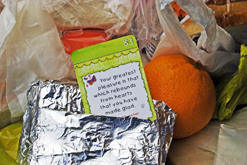 A Bread Buddies sandwich, donated by
one classmate to another, comes with a
special message: “Your greatest
pleasure is that which rebounds from
hearts that you have made glad.” 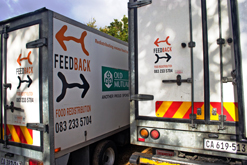 Feedback’s Cape Town branch has five
drivers and five trucks, one of which is
refrigerated. 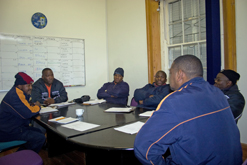 Freddy Janeke presides over the daily
morning planning meeting before the
drivers head off. 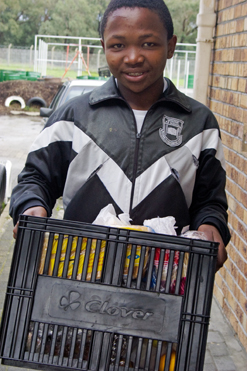 Words and pictures by Jennifer Stern

Most of us have childhood memories of being faced with pile of green and disgusting-looking – but healthy – stuff on our plate. And being admonished by a stern parent to think of all the starving children in the world, and eat it up.

The starving children can have it, we would think – but there’s no way to get it to them. Now, a South African organisation called Feedback Food Redistribution has come up with a way of taking unwanted food and distributing it to the hungry.

South Africa is marked by extremes in wealth, from affluence to deep poverty. While it is one of the few countries in the world fortunate enough to produce more than enough food for its population, people still starve. It’s a matter of redistribution.

Feedback, which started off with one truck and two staff members in Cape Town in 2000 and has since grown to have branches in Johannesburg, Durban and Pietermaritzburg, is just one of the non-profit organisations tackling this problem.

Feedback redistributes surplus food from farmers, caterers, restaurants, corporate canteens and retailers to institutions that care for vulnerable people in some of the most impoverished communities in South Africa. And as most of these organisations help individuals get back on their feet again, it’s a hand-up, not a hand-out.

The organisation tackles not only the problem of immediate hunger, it also addresses long-term food security needs by offering nutrition courses and assisting in the setting up of food gardens.

It’s a pretty hectic operation. At the Cape Town base, distribution coordinator Freddy Janeke starts his day by checking what needs to be picked up where, and then assigns drivers and vehicles to the various routes.

Each driver will start the day off doing a pick-up and then, depending on the nature of the food donated, it will either be transported directly to one or more of the beneficiary organisations, or it will be taken to Feedback headquarters for sorting and storage.

The type of food donated ranges from left-over cooked meals from university residences or vegetables and bread approaching their sell-by date, to breakfast cereals in underweight boxes that can’t be sold. These are the easiest to deal with, as they have a shelf life of months, so they can be stored and distributed when there is less of the more perishable foodstuffs available.

The Cape Town branch has five drivers and five trucks, one of which is refrigerated, so Janeke has to think on his feet and do some quite intricate juggling to assign the right truck and driver to the right route. The other four trucks are fitted with thermo-cubes on the back so they are sufficiently well insulated.

And it’s not just about feeding the hungry. Excess food is a major problem in its own right. If it weren’t for Feedback, over 3 800 tons of good quality organic material would have ended up in landfill last year. And it almost certainly would have quietly fermented to form a vast amount of methane, a greenhouse gas that traps far more heat than carbon dioxide.

Feedback’s primary task is food redistribution, but this innovative organisation is initiating new schemes to improve the lot of both people and the planet. While unequal distribution of food and other resources is a major problem facing society in general, poverty, pollution and inadequate education are equally important. And that’s why Feedback’s Care 2 Carry campaign is so clever.

Speaking of landfill, the biggest culprit there has to be the ubiquitous plastic supermarket bag. So, they’ve thought of a way of tackling that problem, too. Granted, sturdy paper shopping bags are not exactly a new idea, but these ones are a little different. There are 10 designs, all painted by children at the Luzuko Primary School in Gugulethu. The bags are available on the website or from Fruit and Veg City stores for R10, R2 of which goes to Feedback.

It seems that every good initiative by this organisation just seems to spawn another. The Book People, a subsidiary of Don Nelson Publishers, donated 250 books to the Luzuko school library as a way of thanking them for their participation in the Care 2 Carry programme, and each child that took part in the competition also received a book – even if their art was not chosen for a bag.

But this idea didn’t just spring out of nothing. Luzuko Primary is a beneficiary of one of Feedback’s subsidiary programmes, called Bread Buddies, which distributes sandwiches to learners from disadvantaged backgrounds. These children often arrive at school hungry, without having had much in the way of breakfast, and – if it weren’t for school feeding schemes – they’d leave hungry too, which is not conducive to good learning.

Bread buddies enables children from relatively affluent homes to bring an extra sandwich, and pop it into the waiting Bread Buddies crate when they arrive at school. These are then distributed to schools in less affluent areas.

In the Western Cape and KwaZulu-Natal, 53 schools are involved in the Bread Buddies programme, and – between them – distributed 123 332 sandwiches in the last academic year.

A growing number of corporate bread buddies have taken the programme on board, as they realise it is a relatively simple and effective way to make a difference at grassroots level.

Interestingly, Bread Buddies has also had some unexpected spin-offs. Many of the more affluent schools participating in the programme have partnered with their less fortunate counterparts to create an ongoing relationship that is mutually beneficial.

“Also,” says Dean Hand, managing director of Feedback, “it’s good for these children to know where their extra sandwich is going. It’s not too much to say that this contributes to nation building.”