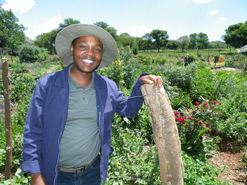 Siyakhana manager Mandla Tshabalala in
his inner city food garden. The crops
behind him show the diversity of
permaculture, which attempts to mimic
natural ecological systems.
(Image: Wilma den Hartigh)

A dumpsite in the Johannesburg inner city has been transformed into a 1-hectare food garden supplying fresh vegetables to children and HIV-positive people, in a project demonstrating the enormous potential of urban agriculture.

The Siyakhana Food Garden Project in Bezuidenhout Valley Park was set up in 2005 on an infertile patch of rocky and clay-filled ground donated by Johannesburg City Parks. Over the years various permaculture and soil conditioning techniques have transformed the land into a productive mini-farm that is home to an orchard of fruit and nut trees, an abundance of vegetables and a large herb garden.

Today it supplies a steady supply of fresh vegetables, herbs, grains and legumes to nine child welfare organisations, as well as to those giving home-based care to the HIV-positive.

“NGOs give us a list of what the children have to eat for good nutrition and then we plant as much of it as we can,” says garden manager Mandla Tshabalala.

Siyakhana – isiZulu for “we are building each other” – is also able to sell its surplus produce to the public, and maintains a small seed bank of locally adapted cultivars.

The need for nutrition

Rudolph has a history in health projects for vulnerable people, having pioneered a mobile dental practice that brought primary oral healthcare to thousands of people in South Africa’s rural areas. He has also worked alongside NGOs providing home-based care to HIV-positive people.

In 2004, while working on one of the faculty’s community outreach initiatives, Rudolph realised that the nutrition of children and the HIV-positive was being neglected. “Rudolph suggested that a food garden project should be started to address urban poverty,” Tshabalala says.

Tshabalala started working at the food garden as a volunteer, later taking on a salaried position. Now a true urban farmer, he has a clear enthusiasm for food gardens as a tool for social development.

This was further encouraged when he got the opportunity to visit an Eco Village in Germany. “There I saw the benefits, and I wish that South Africa could replicate the same concept,” he says. “With food gardens you won’t see anyone go hungry, and this would be a blessing for all South Africans.”

Tshabalala is helped by nine previously unemployed men and women who tend to the garden daily. He had no background in farming, but learned quickly. “I went on courses to learn about crop production and permaculture, read a lot of books and then just built up my practical experience in farming.”

A key part of Siyakhana’s success comes from using the techniques of permaculture, which uses organic principles and mimics the diversity of natural ecologies. “We don’t have a problem with pests because the garden is so diverse,” Tshabalala says. “It functions like a community, and the more you increase the different species of plants, the fewer pests there are.”

The Siyakhana herb garden stocks a wide variety of herbs, such as rosemary, oregano, sage, lavender and echinacea, that can be used for affordable and renewable natural healthcare.

A pond designed by Akpofure Taigbenu and associates from the Wits University Department of Civil Engineering ensures that the garden always has irrigation water available. Run-off is collected in the pond to irrigate in the dry seasons. Wetland plants such as reeds and papyrus have been established, and the pond is already attracting waterfowl.

In 2007 the National Development Agency provided Siyakhana with a much-needed cash injection of R700 000. The funds were used to help pay for stipends, buy seeds, a vehicle that would be used for deliveries to beneficiaries, as well as for training people working on the project.

Tshabalala says financial support is welcome, but Siyakhana doesn’t only rely on funding. While the priority is providing fresh produce to its beneficiaries, the garden also generates an income by selling surplus produce to people in the area.

Tshabalala has become something of a resident herbalist, too, frequently helping passersby to identify and treat physical ailments. “I am self-taught, but I also learned much about the food and medicinal applications of herbs from my grandfather,” he says.

Their sun-dried herbs are provided to beneficiaries in the form of herbal salts. Tshabalala also manufactures a range of popular herbal products such as cough syrup, immune-booster tea and skin-care ointment. Gardeners can also buy purchase healthy organic vegetable seedlings that are cultivated on-site. Even restaurants have shown interest in buying organic produce from Siyakhana.

Makgodu Tsehloane, the marketing and communications manager for the National Development Agency, says Siyakhana is a model project that shows how sustainable food production in South Africa should work. “With South Africa’s unemployment rate estimated at 23.5% and a slowing growth rate due to the economic recession, South Africans need to look for alternative solutions for poverty alleviation,” she says.

It also holds promise for ways in which poor women can empower themselves. “Permaculture projects such as Siyakhana offer a long-term empowerment solution to women through education, research and other skills needed for running the project.”

More South Africans are changing the way they think about food, causing a renewed interest in food gardening in South Africa. Mokgadi Itsweng, head chef and owner of Black Sage, a catering company that specialises in contemporary African cuisine, says that this trend is not only making healthy food such as fruit and vegetables more readily available, but it is also providing food security.

The South African government is beginning to support the idea of food gardens. Earlier this year, as part of Nelson Mandela Day celebrations, members of parliament from all political parties undertook to work with government at provincial and municipal level to start food gardens in schools and communities.