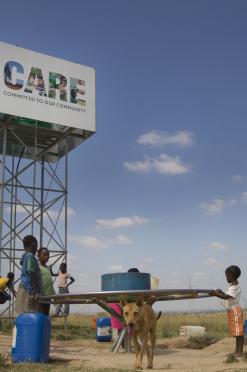 The roundabout Playpump, one of the
innovative strategies that help communities
to gain access to clean water. (Image:
Chris Kirchhoff, MediaClub South Africa.
For more photos, visit the image library.) 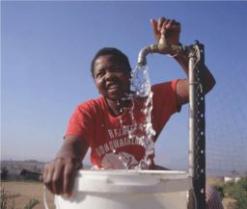 Many communities, especially in rural
areas, struggle with the problem of safe
drinking water and sanitation.
(Image: International Water Association)

The Department of Water Affairs and Forestry (DWAF) is a global winner in the International Water Association’s (IWA) Project Innovation Award programme for 2008. In the category of Operations and Management category, DWAF, in conjunction with the Institute of Municipal Engineering of Southern Africa and water engineering consultants Emanti Management, was recognised for its pioneering municipal water quality management in South Africa.

DWAF won the European regional award for Operations and Management in May 2008, and was named as one of five global winners in early September. The awards will be presented on 10 September 2008, at the IWA World Water Congress and Exhibition in Vienna, Austria.

The IWA established the Project Innovation Award programme in 2006 to pay tribute to excellence and innovation in water engineering projects around the world. The awards ceremony is held on a biennial basis, with the inaugural event taking place at the World Water Congress in Beijing in 2006.

The awards are given in five categories: applied research, planning, design, operations and management, and small projects. Projects are judged in each region by an international panel drawn from IWA members, and evaluated according to a set of criteria that focuses on excellence and innovation, not only in project conception, but also in results.

South Africa faces the same water-related challenges as many other parts of the continent. There has been marked success in tackling this issue, as revealed by Statistics South Africa’s 2007 general household survey, which reports that a number of provinces have improved access to pipe or tap water. The majority of those who receive piped water from their municipality gave a positive rating for the service.

However, many municipalities still struggle with meeting the challenge and have been unable to implement adequate water treatment and quality management measures.

In 2006, the national Department of Water Affairs and Forestry introduced an innovative two-year project for the countrywide deployment of an electronic water quality management system known as eWQMS. All 166 municipal water services authorities in South Africa received eWQMS.

The system was developed and is maintained by Emanti Management and rolled out by DWAF, the Institute of Municipal Engineering of Southern Africa, and water engineering consultants including Emanti.

Minister of Water Affairs and Forestry Lindiwe Hendricks commented in May 2008 that, “The electronic water quality management system that we have established is able to pick up problem areas and allow us to work with relevant structures and organisations to deal with these problems.”

According to IWA, some 90% of municipal water authorities are currently submitting drinking water data in a regular and timely manner. The eWQMS system has established that 94% of municipalities across the country deliver drinking water that meets national quality standards. Hendricks denounced as “unacceptable” the 6%, located mainly in rural areas, which are non-compliant, and said that mayors of those municipalities had been contacted and instructed to urgently address the situation.

The minister also said that DWAF was studying the legislation to identify the means of taking over the errant municipalities’ water quality management role.

One of the developing world’s key problems is access to adequate drinking water and sanitation, especially in rural areas. According to statistics released by the World Health Organisation, over a billion people lacked access to improved water sources in 2002. This represented 17% of the global population at the time. In sub-Saharan Africa, 42% of all people did not have access to improved water.

Improved access to water is an important feature of the United Nations’ Millennium Development Goals programme, which sets out, as one of its main targets, the halving of the number of people without sustainable access to safe drinking water and basic sanitation by 2015. The United Nations has also declared 2005 to 2015 as the international “Water for Life” decade for action, with a view to increasing the awareness of the world on water-related issues.

The World Health Organisation says that in order to meet the water supply target, an additional 260 000 people every day up to 2015 must gain access to improved water.

The IWA’s mission is to lead the global development of sustainable water management at local, national and international levels, in both the developed and developing world. This through is done through its global network of leading water professionals, providing services and products to members, including conferences and publications.

The other four IWA global winners for 2008 are: