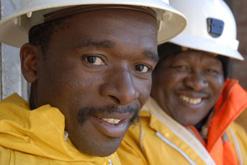 Cage assistants Moeketsi Momlekoa and
Ndlaka Mtano at the shaft at Harmony
Gold Mine in Welkom, Free State. The
Expanded Public Works Programme aims
to give the jobless short-term work that
will train them in the skills they need to
find permanent employment. (Image:
Graeme Williams, MediaClubSouthAfrica.com.
For more photos, visit the image library.)

The Expanded Public Works Programme (EPWP), set up by the South African government in 2004 to fight poverty by using existing government budgets to create jobs in labour-intensive projects, has reached one of its major goals a full year ahead of schedule – it has created over a million new job opportunities.

In his State of the Nation address in 2003 President Thabo Mbeki announced the new initiative, aimed at drawing at least 1-million jobless people into productive work between 2004 and 2009. Of those, 40% would be women, 30% would be youth and 2% would be disabled.

The EPWP arose out of the 2003 Growth and Development Summit, which explored the causes of unemployment. The programme is the major instrument of the Department of Public Works’ (DPW) poverty alleviation strategy, working as a bridge between South Africa’s formal and informal economies.

The EPWP has two major components: creating employment using labour-intensive methods, and giving people skills they can use to find jobs when their work in the EPWP is done.

Although the projects have a limited lifespan, the main focus is on skills development and access to work, which allows the previously unemployed to take their first steps into the job market.

In her annual budget speech in parliament in May 2008, Minister of Public Works Thoko Didiza said the target of a million jobs had been reached by the end of April. Exactly 1 077 801 work opportunities had been created, way ahead of the March 2009 deadline.

The EPWP had also surpassed its targets for women and youth, who made up 47% and 40% respectively of those employed.

Didiza cited examples of the impact the EPWP has had on the lives of ordinary South Africans. One is Samuel Mangena of Limpopo, a former farmworker who, with the help of the EPWP, brought two acres of land under cultivation, growing tomatoes and other crops. He is now so successful he is able to employ six workers full-time and another 10 seasonally. “Such a daring spirit of entrepreneurial adventure should be an inspiration to the country,” said Didiza.

She also mentioned the Siyazenzela waste management project, which combines job creation with care for the environment. In the programme, modelled after one used in Curituba, Brazil, poor households collect garbage from their neighbourhoods and exchange it for food vouchers and groceries. Piloted in KwaZulu-Natal, the programme is to be rolled out to other provinces.

“The majority of participants in the Expanded Public Works Programme have earned income during their involvement,” said Didiza, “which made it possible for them to support their families and invest in entrepreneurial activities that have become sustainable after they exited the programme. This has been possible because of the limited training they received while working in the various projects.”

She highlighted the Kamoso Awards, initiated in 2007 to reward municipalities, provinces, and other public bodies that showed excellence in implementing the infrastructure component of EPWP in their regions. It was later expanded to include the economy, environment, and social interventions. The awards were presented in July 2008.

“The EPWP has been very effective in reaching the target of 1-million work opportunities a year ahead of schedule,” the minister said. “However, we recognise that given the state of unemployment in the country, the EPWP needs to be significantly bigger.”

Because of this, says EPWP chief director Ismail Akhalwaya, the programme’s targets may be revised, one of which may be the creation of 1.5-million job opportunities every year by 2014.

The second phase of the EPWP, set to launch in March 2009, will include targets up to 2014. The DPW has studied similar systems in Argentina and India and is hoping to introduce some of those methods into phase two.

The Indian National Rural Employment Guarantee Act, which guarantees 100 days of work annually to at least one unskilled and unemployed person in a rural household where no one has a job, is one of the strategies studied by the DPW. This and other initiatives were on the agenda at the International Labour Organisation’s 12th regional seminar on promoting labour-intensive practices, held in November 2007 in Durban.

The use of legislation to address unemployment is still a much-discussed topic, with some experts saying it could increase social dependence and corruption. On the other hand, those in favour argue that the legal route would overcome current objections regarding the temporary nature of EPWP jobs, and would cost up to R30-billion annually in wages compared with the R3-billion currently disbursed – making a far greater impact on poverty.

Also under consideration is the potential contribution to the EPWP of non-state institutions such as NGOs and community-based organisations, as well as the private sector and its large number of corporate social responsibility projects.

The Business Trust, an association of local companies that works with government to create jobs and provide skills training, already participates in the EPWP, committing R100-million for the programme’s first five years.

The EPWP is specifically looking at proposals that will halve the number of unemployed by 2014, said Didiza, in accordance with the United Nations Millennium Development Goals. Under this international programme governments and organisations around the world are working to reduce poverty and provide unemployment for all, including women and the youth, by 2015.

Unfortunately, only 14% of EPWP beneficiaries have found permanent jobs afterwards. But Akhalwaya says this problem will be addressed. “The EPWP is an ongoing programme,” he said, “and for phase two we will make the necessary changes to its design, including training and exit strategies, that will improve its ability to deliver on its objectives.”

Poor-quality training is another problem the second phase will attempt to solve. “We are using the remainder of the period to address some of the challenges, and to lay out a much larger programme for the next five years,” he said.