A record number of voters will select from a record number of political parties when South Africa holds its fifth national democratic elections on 7 May 2014, as the country celebrates 20 years of freedom since the end of apartheid in 1994. We bring you a collection of articles on this historic vote. 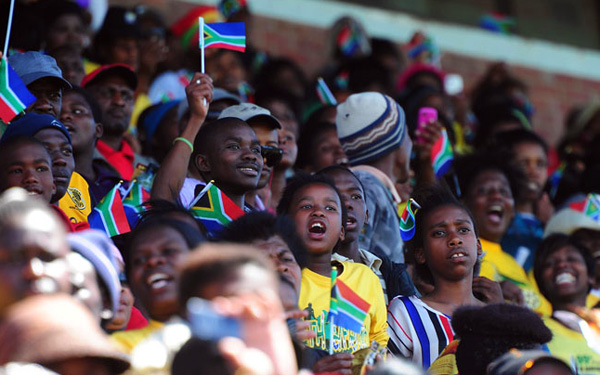 Hey, we get a day off work … South African comedians, musicians, actors and ordinary working people have come together for a video campaign to urge everyone in the country, come Wednesday 7 May, to just get out and vote. READ MORE

Frequently asked questions about voting in the 2014 elections

Why vote? Am I eligible to vote? Where do I vote? What are my rights as a voter? Read our plain English answers to these and many more questions about South Africa’s 2014 elections. READ MORE

On 7 May 2014 South Africans will vote in the fifth democratic elections since the end of apartheid 20 years ago. We bring you a timetable leading up to the elections, a video for first-time voters, and useful contacts for finding out more about the election process. READ MORE

The Cabinet has called on South Africans to celebrate 20 years of freedom by participating peacefully in electioneering and voting in the country’s 7 May elections, “with tolerance for the right of all voters to express their opinions publicly and make their choice privately in the voting booth”. READ MORE

Political parties registered to contest South Africa’s 7 May general election on Wednesday signed the Independent Electoral Commission’s code of conduct, committing themselves to refrain from any acts of violence, incitement or intimidation in the lead-up to the polls. READ MORE

Twenty years into democracy, multi-party politics is flourishing in South Africa, with a record number of political parties set to contest the country’s fifth national and provincial elections on 7 May. READ MORE

Elections 2014: A quick guide to all the parties

On 7 May 2014 South Africans will vote in the country’s fifth national democratic elections, 20 years after the end of apartheid in 1994. We bring you a brief guide to the 152 parties voters can choose from – the established, the newcomers, and the outliers. READ MORE

Chief electoral officer Mosotho Moepya has certified South Africa’s voters’ roll, setting the stage for 25.3-million (25 390 150) voters to cast their ballots in the country’s national and provincial elections on 7 May. READ MORE

South Africa’s Independent Electoral Commission is featuring popular musicians and media personalities in a multimedia advertising campaign in a bid to increase the youth vote in this year’s general elections. READ MORE