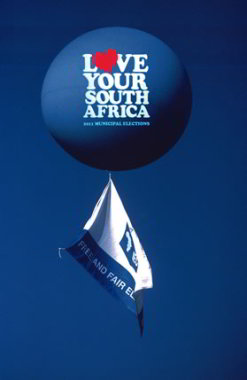 The Love Your South Africa campaign
aims to foster a sense of belonging among
citizens, thereby encouraging them to
make their mark on Election Day.
(Image: Government Online)

South Africans are again using their right to vote in the upcoming 2011 local government elections, which take place on 18 May. This is the third such event since the arrival of democracy in 1994.

All elections in South Africa are overseen by the Independent Electoral Commission (IEC), a permanent body created by the Constitution to manage free and fair elections at all levels of government. Although publicly funded and accountable to parliament, the IEC is independent of the government.

On 1 September 2010 the IEC received lists of South Africa’s new wards from the Municipal Demarcation Board, an independent body responsible for marking municipal boundaries and establishing new wards and voting districts.

The 2011 municipal elections are taking place in eight metropolitan councils, 226 local councils, 44 district councils and 4 277 wards. Accordingly, the IEC has established 20 868 voting districts. Of these, 633 are categorised as voting centres and will cater for large numbers of voters.

As with national and provincial elections, municipal elections take place every five years. The five-year term of the present municipal administrations started on 2 March 2006 and has now ended.

Municipal by-elections take place within 90 days after a municipal ward council seat becomes vacant because of the death, expulsion or resignation of a ward councillor.

A mixed or hybrid system, making use of both the ward system and the proportional representation system, is used for municipal elections.

There are three types of municipal councils in South Africa:

For metropolitan municipalities, there are two types of elections in each ward:

In municipal elections, you vote for a political party and a ward councillor (a mixed system of proportional representation and a ward constituency) to get seats at the municipal level.

How do I register?
To vote in elections, you must register as a voter. You only have to register once, unless you move or your voting district changes. South Africans over the age of 16, in possession of a green bar-coded ID book or temporary ID document, may register.

Registration for the 2011 elections is now closed.

See Moved since you registered? to find out how to check if your voting district has changed.

How do I know if or where I’m registered?
You can check your registration status by:

If you’re registered, you will be informed of your voting station details.

Where can I vote?
You need to vote at the voting station at which you’re registered.

Can I vote online or by post?
No, you must vote in person at your voting station.

How many ballot papers will I get?
If you live in a metropolitan area (e.g. Johannesburg), you’ll receive two ballots: one for a ward councillor and one for a party.