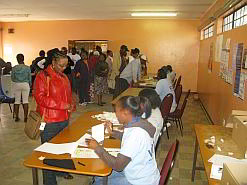 The voting process in Diepkloof Extension,
Soweto, went smoothly with residents
taking no longer than 15 minutes to cast
their vote. 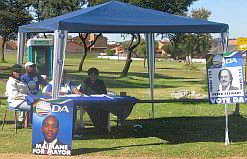 Representatives of the Democratic
Alliance canvassed for votes and new
members outside the polling station.
(Images: Ray Maota)

South Africa’s local government elections went well in most parts of the country, despite a few operational glitches, and the Independent Electoral Commission (IEC) is confident of reaching its 40% voter turnout target.

The fourth poll of its kind took place throughout South Africa on 18 May 2011, with nearly 23-million citizens expected to have voted.

Chief Electoral Officer Advocate Pansy Tlakula of the IEC said: “The voting went well throughout the country and was still going well in those areas where voting stations were still open.”

Tlakula was speaking at the IEC’s Results Operation Centre in Pretoria, Gauteng, on election night.

“Some of the operational glitches experienced at the polling stations included insufficient ballot papers, technical problems with scanners and off-the-grid power outages. About seven IEC officials, six in Limpopo and one in the Free State, were dismissed for displaying political party stickers or banners,” added Tlakula.

She said although there were challenges, not one was insurmountable.

The IEC is bound by law to produce the results of voting within seven days to allow political parties to object to the results if deemed necessary.

Many polling stations in KwaZulu-Natal, Gauteng and Mpumalanga stayed open long after the proposed closing time of 7pm.

Tlakula said at the time: “The IEC will allow those voters who arrive in their station perimeters before 7pm to vote and no one will be denied their right to vote.”

Zuma said: “I am very optimistic because we have made serious advances and we will surprise many.”

The Department of Home Affairs put measures in place on election day to issue temporary identity documents, making staff available on what was deemed a public holiday.

The South African government has expressed its gratitude for the smooth running of the elections.

Government spokesperson Jimmy Manyi said: “The government expresses great satisfaction with the collective efforts of departments in ensuring the success registered thus far in rolling out the fourth democratic local government elections under the auspices and leadership of the Independent Electoral Commission.”

The government also congratulated all auxiliary agencies for making sure the elections went well.

“Of particular note is the prompt response by security officials in isolated places where individuals or small groups sought to be disruptive,” said Manyi. “Eskom is also congratulated for making sure no power outages occurred during the voting.”

In the Western Cape, two voters died while waiting to cast their ballots.

Tlakula said: “We are sad to announce that two people died in the Western Cape, one while he was waiting to cast his vote in Tafelsig in Mitchells Plain. The other one, a lady, died outside the perimeters of the voting station in Kannaland in Ladysmith also in the Western Cape. We wish their families a speedy recovery from their loss.”

Voter turnout at the Fons Luminis High School polling station was no different to past elections.

Residents of Diepkloof Extension started trickling in at the polling station at 9am. The queue remained brief throughout the day, taking residents between 10 and 15 minutes to complete the entire voting process.

Philani Mngomezulu, a resident, said: “I always look forward to coming and voting at our polling station as there are never long queues. I will vote for our councillor to stay on again as he has made our neighbourhood a very desirable place to live in.”

IEC workers at the polling station made sure the elderly were helped first and generally ensured that things ran smoothly. Outside the station Democratic Alliance and ANC representatives canvassed for votes.

Mphathisi Moloi, a resident who encouraged others to join the ANC, said: “I won’t say I went through the struggle, but I identify with the ANC because it advocates youth development and has made sure after the first democratic elections that everyone was treated the same, with no prejudice.”

Police presence at the station was at a minimum with three officers manning the gates, but police patrol cars passed the station almost every 30 minutes.