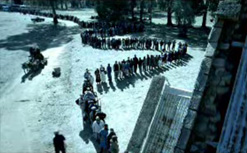 A recreation of people queuing to vote
during South Africa’s historic 1994
elections in a still from the Brand South
Africa promotional video We’ve Done It
Before.

South Africa is set for unprecedented voter turnout in 2009, with more than 21-million people – nearly a quarter of them youngsters – registered to vote in the country’s fourth democratic election, likely to be held in April.

The Independent Electoral Commission (IEC) announced on Wednesday that a record 1.6-million people had taken part in its voter registration drive over the weekend of 8 to 9 November – the vast majority of them aged 18 to 29. South Africans are eligible to vote from the age of 18.

“The drive has far surpassed our expectations,” IEC chairperson Brigalia Bam said in a statement.

“The IEC is delighted to see the success of the weekend drive to register new voters, especially the youth, who represent a majority of the weekend registration activity at 77.9%. We are proud to say that this was our most successful registration drive since 2000.”

Out of a total population estimated at 48.7-million people, some 27-million are eligible to vote. During the previous election held in 2004, 20-million voters were registered, but only 15-million actually cast their ballots.

The new interest in participating in the election is largely seen as a result of political developments in the country. These have included the replacement of Thabo Mbeki with Kgamela Motlanthe as president, and the formation of a new political party, the Congress of the People, by a breakaway faction of the ruling African National Congress.

Barack Obama’s successful election campaign in the US may also have something to do with it – particularly in kindling interest in voting among previously apathetic young people. The election of America’s first black – and relatively young – president may have inspired the youth to believe democracy can actually work.

“We have seen how the Obama strategy enticed younger voters to enrol to vote, and our politicians have clearly not employed this, but current political developments seem to have encouraged the youth to vote,” political analyst Steven Friedman told The Times.

Despite heavy rain a total of 3.7-million people visited the 19 000 registration centres across the country during the course of the weekend, to register for the first time, re-register, change their voting districts or inspect their details on the voters’ roll.

Before the registration drive there were 20-million eligible voters, and after 21.7-million. The percentage of voters in the 18 to 29 age category rose from 20.4% of registered voters to 24.3% – approaching a quarter.

Bam said while the IEC is pleased with the results of the registration weekend, it also recognised that there may be people who missed the opportunity. These people can register at the IEC offices in their municipalities during normal office hours.

The South African voters’ roll closes on the day the president proclaims the election date. The IEC announced yesterday that it will hold a second registration drive early in 2009, before the proclamation. This is likely to push voter numbers to an even higher record.