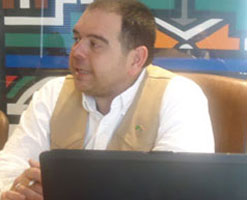 According to de Kock, the IIAG has become a respected and much-referenced index focusing on the development of governance across the continent.
(Image: Melissa Jane Cook)

South Africa is one of eight countries to have remained consistently in the top 10 on the Ibrahim Index of African Governance (IIAG) since 2000.

South Africa maintained its score of 71 in the 2013 IIAG, keeping it at fifth out of 52 countries and third in southern Africa. But it dropped one point overall since 2000, with a four-point drop in its education score. The average African score remained at 51, while Mauritius was again the highest-ranking country with a score of 82.9, and Zimbabwe the lowest-ranking country in southern Africa, at 47th out of 52 overall and scoring 35.4. The index was released on 14 October.

Brand South Africa’s Dr Petrus de Kock gave a presentation, focusing on the key findings and lessons for South Africa. Since its inception, according to De Kock, the IIAG had become a respected and much-referenced index focused on the development of governance across the continent.

Key findings from the 2013 IIAG indicate that:

• South Africa retains its fifth position in the overall rankings, while ranking top of the 52 states in public management. The index looks at 94 indicators.

• South Africa’s most notable improvement is in sustainable economic opportunity, with its overall ranking in the category rising from eighth in 2012 to fifth in the following year.

• Improvements in the sub-indicators of this category include: business environment (six to five in 2013), infrastructure (12 to seven), and the rural sector (22 to 21).

• South Africa ranks its highest in the participation and human rights category, at third out of 52. This category measures the protection and promotion of human rights, civil and political participation, and gender issues.

• South Africa ranks its lowest in the safety and rule of law category, at seventh out of 52.

• South Africa ranks its lowest in the personal safety sub-category at 41st out of 52.

Other countries in the top 10 include Botswana, Cape Verde, Ghana, Mauritius, Namibia, Seychelles and Tunisia. In his introduction to the 2013 IIAG, Dr Mohamed “Mo” Ibrahim, a Sudanese-British mobile communications entrepreneur and billionaire, observes: “So what does the 2013 IIAG show? The answer is a mixture of overall progress but increased complexity.

“The findings highlight widespread improvements across the continent since the turn of the century. They show that 94% of people living in Africa now live in a country that has demonstrated overall governance improvement since 2000. Eighteen out of the 52 countries analysed saw their best ever performance in this year’s IIAG. But these figures, of course, also reveal the challenges of sustaining progress and underline that an equitable allocation of resources must be a priority for policy and decision makers.”

The importance of governance in the 21st century could not be underestimated, said De Kock. “In the past decade, African economies have grown at rates of more than 5%. This brings about social change which, in turn, calls on governments to implement more effective governance systems to serve the needs of changing economies and societies.”

Looking at its demographic profile, South Africa was unique on the continent in that approximately 60% of its population was urbanised, he pointed out. “This implies that governance systems at a local level should be geared to serve the needs of the increasing numbers of people living in the urban areas. However, this also means that the country will have to be responsive to the governance needs of the 40% rural citizens and this is precisely [why] South Africa’s ranking in the rural sector still has a lot of room for improvement.”

The IIAG and the country performance table are frameworks for citizens, governments, institutions and business to assess the delivery of public goods and services, and policy outcomes, in every African country. They are tools with which to govern, highlighting continental, regional, national and thematic governance results.

“Brand South Africa has welcomed the IIAG findings and believes that over and above the peer review mechanisms already in place in Africa, independent studies such as these will boost the positive trajectory of the continent as a destination for inward flows of investment and tourism,” De Kock concluded.

Established in 2007, the IIAG is the most comprehensive collection of quantitative data on governance in Africa, according to its website. It is compiled in partnership with experts from a number of the continent’s institutions and provides an annual assessment of governance in every African country. IIAG data are classified in four categories:

• Safety and rule of law;