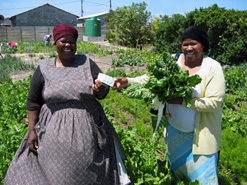 Earning cash from garden vegetables at
Siyazama Community Garden at Macassar
in Khayelitsha, the vast township outside
Cape Town in the Western Cape.
(Image: Harvest of Hope) 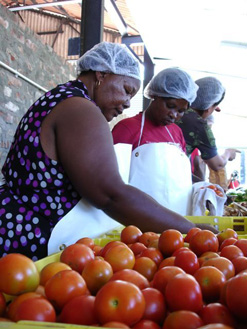 At Abalimi Bezekhaya’s packing centre in
Philippi township vegetables are packed in
boxes for sale to more affluent families in
Cape Town as part of the Harvest of Hope
project.
(Image: Irin Photo)

Nestled among shacks set on the sea-sand soil of the Cape Flats, an impoverished region of informal settlements and townships near Cape Town in the Western Cape, there is a life-saving
5 000-square-metre patch of green.

“This garden has changed my life,” said Phillipina Ndamane, 74, a member of the Fezeka Community Garden (FCG) in Gugulethu township. “We were suffering; we had no food to eat so we tried to make a garden.”

The FCG, beneath towering electricity pylons, is one of 800 community and home gardens nurtured into existence by Abalimi Bezekhaya, an urban agriculture and environmental action association.

Since its inception in 1982 as a Catholic Church project, from which it separated in 1994, Abalimi Bezekhaya, meaning “farmers of home” in isiXhosa, has helped individuals, groups and community-based organisations develop permanent organic food-growing and conservation projects as the basis for sustainable livelihoods, job creation and poverty alleviation.

Abalimi provides training and low-cost, subsidised gardening resources like manure, seeds, tools, and organic pest control at its two gardens in Nyanga and Khayelitsha townships, which are staffed by fieldworkers from those communities.

Some 3 000 micro-farmers use of the gardens, but the benefits spill over into the wider target of roughly 1-million people who live in the vast informal sprawl on the outskirts of metropolitan Cape Town, where unemployment is around 40%.

“We didn’t know a lot of things like spinach, which is a healthy thing; we didn’t even know the green pepper! Now I eat green beans, and the children, they also like all these vegetables,” said Phillipina, who helps care for at least a dozen grandchildren.

For some, the gardens are a better alternative to conventional employment. “If this garden had been here before, I wouldn’t have gone to work outside as a domestic worker,” said Shaba Esitang, 78. “As a domestic worker, you’re working for the money to pay for the vegetables. But in the garden, you grow your own veggies to eat or sell. You own it.”

The advantages manifest not only on the dinner table: those who grow more than they need sell the surplus.

“They employ themselves – we’re there only to motivate and help,” said Abalimi operations manager Christina Kaba.

At Abalimi’s packing centre in Philippi township, half a dozen women and one young man wash and sort piles of brightly coloured vegetables and pack them into “weekly boxes” of produce that are pre-ordered by families in well-off suburbs of Cape Town.

With the assistance of the South African Institute of Entrepreneurship, Harvest of Hope was created in early 2008 to provide a new market for excess produce. As a result, nearly 10% of the farming groups now earn a secure monthly income.

A box of vegetables sells for R95 (US$9.50), half of which goes directly to the farmer. Current output is around 120 boxes a week, according to Abalimi’s director, Rob Small, who maintains that the project could create one full-time job earning up to R3 000 ($300) a month on just 500 square meters of land.

“But it’s a farming job, not a nine-to-five, so that’s the tricky part: to inspire people to work that hard, and that’s where the limiting factor comes in – most people are waiting for something easier.”

“The biggest limiting factor is poor people not gaining quickly enough the skills and tools with which to supply the market. We’ve got enough farmers, but most are uneducated or semi-educated – some don’t know what a square meter is,” Small commented.

“If they had those skills and tools, and the ability to work consistently at a disciplined level, we could be supplying 600 boxes and more in the next month. The demand is definitely there.”

Despite the lack of alternative jobs, the youth have not shown any great enthusiasm. “Young people don’t want to even see the garden – they think gardens are done by poor and uneducated people. When I started, people laughed at me; they said, ‘How can you come to Cape Town to work in the soil like a rural area?'” Kaba said.

Small agreed. “Probably there wouldn’t be an urban agricultural movement in Cape Town if there wasn’t 40% unemployment, but it’s starting to be the case that bigger rewards are coming, and lately a lot of young faces are checking in,” he commented. “They’ve heard, and smelled the money, and once they get involved, who knows? They might even find they love farming.”