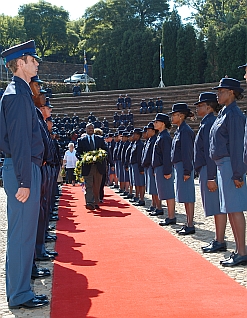 South Africa’s new elite crime investigation unit is ready to roll – so says Anwar Dramat, the head of the Directorate of Priority Crimes Investigation (DPCI), which is to crack down on corruption and organised and commercial crime.

Struggle veteran Dramat was appointed as crime’s new worst enemy in May 2009. The DPCI replaces the Directorate of Special Operations, better known as the Scorpions.

Dramat was speaking at the second anniversary celebrations of the Primedia Crimeline, a service that enables citizens to send tip-offs to the police via anonymous text messages, or online submissions.

The latest statistics on the Crimeline website show that an impressive 749 suspected criminals have been arrested so far with the help of the public.

With the South African Police Services Amendment Act and the National Prosecuting Authority Amendment Act signed into law earlier in 2009, the DCPI will start its duties on 1 July, on which date the Scorpions will officially cease to exist.

The new unit will take over the investigation of 639 cases currently on the Scorpions’ files.

Whereas the Scorpions were a division of the National Prosecuting Authority of South Africa, the DPCI is part of the police force.

The formation of the DPCI is seen by many as a new era in unbiased crime-fighting in South Africa.

South Africa’s new top cop reaffirmed his mandate from government, which was to “crush organised crime without mercy, and deal with the criminals, regardless of their stature or standing.”

“The DPCI is taking shape,” said Dramat. “We are hopeful that later next month criminals will start to realise our ability not only to bite, but also to chew. We are strong, capable and well-resourced to hunt any criminal, anywhere, at any time.”

Dramat added that he hoped for a final staff complement of between 600 and 800, drawn from the South African Police Service and the Scorpions. The DPCI will also work closely with other government departments such as the South African Revenue Service, the Financial Intelligence Centre and the Department of Home Affairs.

South Africans can begin to rest a little easier with the knowledge that the DPCI is “ready to enter the battlefield”.

Dramat is the former deputy provincial commissioner of police in the Western Cape and, said police minister Nathi Mthethwa at the announcement of Dramat as DPCI chief, is respected for his dedication to upholding the law as well as his understanding of organised crime and success in undercover operations.

He spent about eight years in the prison cells of Robben Island and also worked underground for the ruling African National Congress.

Dramat has served the police since 1995 and is confident that under his direction crime in South Africa will decline.

“I commit myself to work for all South Africans to ensure that our country finally eradicates the scourge of fraud corruption and organised crime,” he said, accepting his appointment with humility.

“The purpose of establishing the Directorate for Priority Crime Investigation is exactly to enhance the combating and investigation of priority crimes,” said Mthethwa, adding that all prospective members who make it past the rigorous first stage of selection will be thoroughly screened in terms of security and integrity standards.

The Scorpions, a tough unit of some 500 police as well as financial, forensic and intelligence experts, were controversially dissolved by then-president Kgalema Motlanthe in January 2009, after months of opposition from the public and private sectors as well as citizens.

Johannesburg businessman Hugh Glenister organised a massive petition and eventually brought a case to the bench of the Constitutional Court in an effort to stop legislation that would disband the Scorpions. Glenister lost his case on the grounds that the Constitutional Court did not deem it appropriate or justified to intervene in the legislative process, as that is only warranted if legislation would cause considerable irreversible harm.

During the eight years in which the Scorpions were active, they focused on particularly serious crime in South Africa, such as drug trafficking, diamond smuggling and fraud. They spared nobody, and on a number of occasions exposed high-profile names in their quest for justice.

The Scorpions notoriously chased a corruption case against President Jacob Zuma for eight years, only to see the charges dropped shortly before the country’s general election in April amid counter-accusations that the unit had been misused for political purposes.

The Scorpions were extremely effective in their duty. Their reported success rate in convictions varies, but ranges between 85% and 94%.