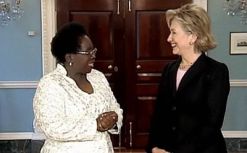 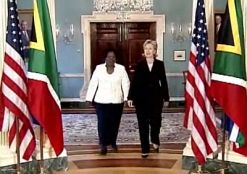 The two politicians brief the media after
their meeting.
(Image: US Department of State) 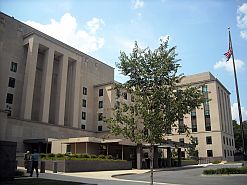 The US Department of State in Washington.
(Image: Wikimedia)

South African foreign minister Nkosazana Dlamini-Zuma has held her first official talks with recently-appointed US secretary of state Hillary Clinton. The minister met with her US counterpart on 19 March 2009 at the State Department in Washington.

This is the first official meeting between the two since the change in US administration in January 2009, although Dlamini-Zuma remarked that they knew each other from other engagements.

The foreign minister then travelled from New York to Washington for her high-level meeting with Clinton.

Dlamini-Zuma and Clinton were scheduled to discuss political developments concerning Africa and the US, according to the South African department of foreign affairs. They were also to review current bilateral political, economic and trade relations, as well as issues of multilateral concern. The global economic crisis was also on the agenda, said departmental spokesman Ronnie Mamoepa.

The two countries wish to strengthen and consolidate existing strategic bilateral relations politically and economically, especially since the advent of the new administration.

South Africa and the US established formal relations in 1789 when the US opened a consulate in Cape Town. While relations became strained during the apartheid years, with the US implementing wide-ranging sanctions against South Africa, the situation returned to normal after South Africa’s historic first democratic elections in 1994.

Since then the overall bilateral relationship with the US has remained strong. Over the last decade business, civilian and governmental links have expanded. Today the US is one of the single largest foreign investors in the South African economy, and South Africa is also one of the US’s leading trading partners on the continent in both import and export terms. After the UK, the US is the second-largest source of tourists to South Africa.

The two countries have a common agenda in a number of areas, including the promotion of human rights as well as international trade, the prevention of the proliferation of weapons of mass destruction and the elimination of the illegal narcotics trade.

Clinton welcomed the minister warmly. “It’s a special treat to welcome not only the foreign minister, but someone who I’ve had the privilege of meeting before, and looking forward now to work together in our new capacity. We have so many important issues to discuss with South Africa. And the opportunity for us to have a comprehensive relationship that touches on all of these important matters is very exciting to me, Madame Minister.”

Dlamini-Zuma was equally gracious in her response. “It is a pleasure for South Africa to be able to meet the secretary of state in a new capacity,” she said, adding that she was delighted to have the opportunity to investigate ways in which South Africa-US bilateral relations could be strengthened, as well as probe co-operation in many other areas of mutual interest.