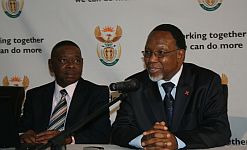 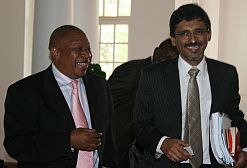 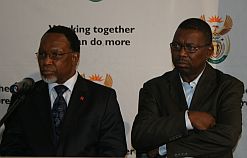 The South African government has launched the Human Resources Development Council (HRDC) to tackle high levels of unemployment and grow the country’s economy.

It was officially launched by Deputy President Kgalema Motlanthe at the Presidential Guesthouse in on 30 March. The inaugural meeting was attended by 36 of the council’s 43 members.

Comprising leaders from different sectors of the economy, the council will drive skills development in . Although part of its aim is to ensure government helps job-seekers become more competent, the HRDC will see that all divisions of employment and training assume a more meaningful role in the country.

“Government has for years spoken about skills development and its importance in ensuring economic development and ultimately dealing with unemployment,” said Minister of Higher Education and Training Blade Nzimande at the launch.

“The launch of this council is a milestone towards this goal and ensuring that skills development is conceptualised as a critical component of … human development.”

The council is led and chaired by the deputy president and Nzimande leads its secretariat, which is tasked with ensuring that all the HRDC’s objectives are implemented.

The secretariat includes a technical working group to “execute the decisions of council on matters relating to human resource development and advise council”.

The technical working group will also be responsible for setting up task teams of “additional expertise” to achieve the council’s goals. “The composition of these [task teams] will depend on the nature and scope of work that the TWG [technical working group] needs them to undertake,” said Mary Metcalfe, director-general of the Higher Education and Training Department, during a presentation at the launch.

“Education is one of government’s priorities and the work of this council will assist in troubleshooting the problem areas in the education and training system,” said Nzimande.

The Department of Higher Education has committed to “urgently overcoming the shortages in the supply of people with the priority skills needed” and “increasing the number of appropriately skilled people to meet the demands of our current and emerging economic and social development priorities”, Nzimande added.

The council will also ensure improved access to quality education and schooling up to grade 12 level “that is purposefully focused on achieving an improvement in education outcomes for the poor”. Furthermore, it will seek to adequately equip pupils to pursue post-school education, “including vocational education and training, or employment”.

It has resolved to “urgently implement skills development programmes that are aimed at overcoming poverty and unemployment”, Nzimande said.

In his address the minister referred to students from the country’s universities of technology who have to do internships before they can graduate, but yet some still struggle to find permanent work – either in the public or private sector. He said the council needs to find a way of getting employers to open up work spaces for such students.

“Many of our young people with academic qualifications remain unemployed because our skills supply does not match our labour market demands,” said Motlanthe. “We need to ensure that our human resources policies harmonise with economic development needs and opportunities, and that they are broad-based and opportunity-specific.”

The new council builds on the Joint Initiative on Priority Skills Acquisition (Jipsa), which government formed in March 2006. It is not a replacement, said Motlanthe.

Jipsa was set up to address the issue of skills development in the country and helped shape policy for curbing unemployment.

Government said Jipsa has, over a four-year period, provided critical lessons on how to deal with skills challenges facing the country. As Cabinet approved the HRDC in February, “the Jipsa process started winding down with a view to folding into the revised” strategy, said a government document.

“It is encouraging to note that all members are committed to serve on this important structure, not necessarily representing their own sectoral interests, but to collectively lead a decisive attack on education and skills challenges facing ,” Nzimande said.

Ntshalintshali, also the deputy general secretary of the Congress of South African Trade Unions, has been appointed chairperson of the technical working group and the first deputy chair of the council.

Nominations for a second deputy chair and requests to serve on the technical working group are open to council members until 16 April.

The final HRD strategy, drafted by the council, will be adopted at a Cabinet planning session later in 2010.