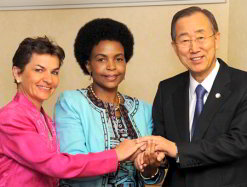 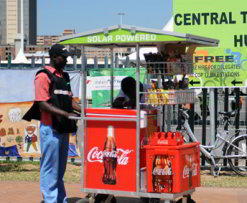 The 17th Conference of the Parties (COP17) ended on a high note in Durban, with the announcement that governments have agreed to a second term of the Kyoto Protocol. The agreement will come into force in January 2013.

The 194 parties to the UN’s Nations Framework Convention on Climate Change took almost an entire extra day to thrash out the agreement, and it wasn’t until early morning on 11 December that the announcement finally came.

The milestone was hailed by UN secretary-general Ban ki-Moon, who said the achievement will define the way nations will respond to climate change in years to come.

The launch of the much-anticipated Green Climate Fund, after a year of waiting, was also announced. This, and the Kyoto Protocol extension, falls under a new set of decisions known as the Durban Platform.

“Taken together, these agreements represent an important advance in our work on climate change,” said Ban, adding that nations should implement them as soon as possible, working together in the spirit of cooperation seen during COP17.

In addition, delegates agreed to adopt a universal legal agreement on climate change no later than 2015.

In her closing remarks, COP17 president Maite Nkoana-Mashabane, South Africa’s minister of international relations and cooperation, said: “Climate change is our common problem which affects us all and the Durban Platform is the story we will take home with us.”

“The decisions that we have taken here are truly historical – the amendment of the Kyoto Protocol; the Green Climate Fund; and the future of the climate change regime.”

Nkoana-Mashabane thanked everyone involved in the successful hosting of the conference, including the UN, the City of Durban, the International Convention Centre, and all support staff.

Work will begin immediately to put structures into place, under a new group called the Ad Hoc Working Group on the Durban Platform for Enhanced Action.

“I salute the countries who made this agreement,” said Christiana Figueres, UNFCCC executive secretary. “They have all laid aside some cherished objectives of their own to meet a common purpose – a long-term solution to climate change,”

Figueres said this is highly significant because the Kyoto Protocol’s accounting rules, mechanisms and markets all remain in action as effective tools to leverage global climate action and as models to inform future agreements.

Delegates also agreed to a significantly advanced framework for the reporting of emission reductions for both developed and developing countries, while taking into consideration the common but differentiated responsibilities.

Governments also agreed on the full implementation of the package to support developing nations, agreed last year in Cancun, Mexico.

“This means that urgent support for the developing world, especially for the poorest and most vulnerable to adapt to climate change, will also be launched on time,” said Figueres.

The package includes the Green Climate Fund, an adaptation committee aimed at improving the coordination of adaptation actions on a global scale, and a technology mechanism. These will become fully operational in 2012.

“While it is clear that these deadlines must be met, countries, citizens and businesses who have been behind the rising global wave of climate action can now push ahead confidently, knowing that Durban has lit up a broader highway to a low-emission, climate resilient future,” said Figueres.

The COP18/CMP8, will take place on 26 November to 7 December 2012 in Qatar, in close cooperation with the Republic of Korea.

– Countries have already started to pledge to contribute to start-up costs of the fund, meaning it can be made ready in 2012, and at the same time can help developing countries get ready to access the fund, boosting their efforts to establish their own clean energy futures and adapt to existing climate change.

– A focussed work programme on long-term finance was set up. This will contribute to the scaling up of climate change finance going forward and will analyse options for the mobilisation of resources from a variety of sources.

– The 16-member adaptation committee will report to the COP on its efforts to improve the coordination of adaptation actions at a global scale.

– The adaptive capacities of the poorest and most vulnerable countries are to be prioritised and strengthened. National adaptation plans will allow developing countries to assess and reduce their vulnerability to climate change.

However, the most vulnerable will receive better protection against loss and damage caused by extreme weather events related to climate change.

– The technology mechanism will become fully operational in 2012. In mid-January 2012 the UNFCCC secretariat will call for proposals for hosts of the operational arm of the mechanism – the Climate Technology Centre and Network.

– Governments agreed a registry to record developing country mitigation actions that seek financial support, and to match these with support. The registry will be a flexible, dynamic, web-based platform.

– A forum and work programme on unintended consequences of climate change actions and policies were established.

– Under the Kyoto Protocol’s Clean Development Mechanism, governments adopted procedures to allow carbon-capture and storage projects. These guidelines will be reviewed every five years to ensure environmental integrity.

– Governments agreed to develop a new market-based mechanism to assist developed countries in meeting part of their targets or commitments under the convention.