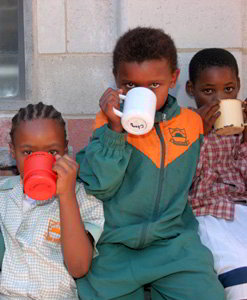 There’s a war on in Nelson Mandela Bay Municipality, but it’s a war being waged with pots and pans. In August the city introduced its War on Hunger Programme, providing up to 6 000 people one decent meal a day, five days a week, while creating jobs for members of the targeted communities. The plan is to eventually feed 20 000 people in 11 wards across the city.

Organised in cooperatives, those running the feeding scheme are all volunteers who will be given skills development training by the Eastern Cape Development Corporation.

The War on Hunger has its roots in the many walk-abouts mayor Zanoxolo Wayile has taken through his municipality, where, seeing first-hand the extent of poverty in the region, he realised the government had to step in. The programme was suggested as an immediate intervention necessary for short-term relief, with the eventual aim being to help individuals become independent and self-sufficient.

“As soon as the individual enters the programme and becomes a beneficiary or member of the centre, one or a combination of interventions or exit strategies needs to be developed in order to take the person out of the feeding scheme system,” says Lumka.

These strategies include skills and entrepreneurial development, other social assistance, community food gardens and the creation of cooperatives. Setting up community food gardens is a long-term plan to make the feeding programme more self-sufficient, and will gradually shift towards commercial viability. The Department of Agriculture has agreed to help with the infrastructure and technical expertise needed to get the gardens going.

The programme has the added benefit of providing a platform to collect data on the most vulnerable groups in these communities, so they can be helped to access welfare grants and other social programmes offered by the government.

Food for the War on Hunger is supplied at cost price by Finro Cash & Carry, which has food delivered to the centres every day by suppliers in the community – thus ensuring a good part of the R10-million allocated for the programme is ploughed back into the local economy.

Background to the problem

The NMBM faces enormous challenges: according to municipality’s 2006 to 2011 Integrated Development Plan, half the population is poor with 112 239 of the total of 289 000 households suffering from extreme hunger on a daily basis, with nothing to eat.

The region has a 35% unemployment rate, but the real figure is probably much higher as official statistics come from before the global economic meltdown, which in 2008 and 2009 sparked massive retrenchments.

Most of the beneficiaries of the War on Hunger are the aged, disabled or children, who survive only on social grants. The government’s old-age and disabled grant is R1 140 per month while a child support grant is R270 per child per month.

The War on Hunger is aligned to the South African government’s National War on Poverty programme, launched in 2008. The national scheme hopes to reach 1 128 of the most deprived municipal wards in the country by 2014.

The Anti-Poverty Strategy focuses on empowering households and communities to take themselves out of poverty with the help of various government initiatives. It puts a strong emphasis on breaking the cycle of poverty by focusing on the development of children to build South Africa’s human capital and ultimately reduce intergenerational poverty.

The Early Childhood Development (ECD) Programme lies at the heart of this goal. The Department of Social Development’s has registered over 16 000 ECD sites and reached more than 700 000 children, many of whom also receive one proper meal per day through these centres. 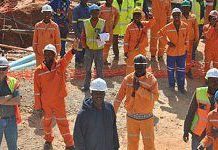