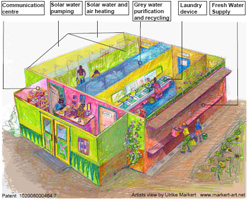 A diagram of the workings of the
communal water house, which is being
piloted in the small Karoo town
of Jansenville, Eastern Cape. 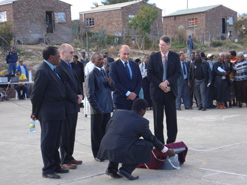 Dignitaries at the sod-turning ceremony
held in July 2008 in Jansenville. 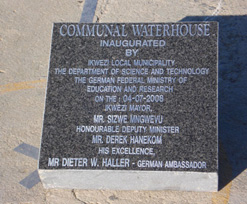 The commemorative plaque unveiled by
The Deputy Minister of Science and
Technology, Derek Hanekom, and His
Excellency the German Ambassador to
South Africa, Dieter Haller. 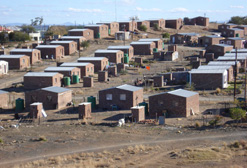 The community will benefit from access to
better quality water.
(All images: Communal Water House.)

In a partnership to boost access to safe drinking water in Africa, South Africa and Germany have developed a unit that promotes water-use efficiency in rural communities.

The communal water house (CWH) is being piloted in the small Karoo town of Jansenville in one of South Africa’s most impoverished provinces, the Eastern Cape. It was unveiled in July 2008 by the national Department of Science and Technology (DST).

Speaking to an audience of jubilant residents at the sod-turning ceremony, Derek Hanekom, deputy minister of science and technology, said, “Today we celebrate the power of innovative thinking and partnership.

“It is hoped that such initiatives will be rolled out to other municipalities in South Africa in the future. This project clearly demonstrates how, through science and technology, we can meet the needs of the poor.”

The DST’s key partners in this project are the German Federal Ministry of Education and Research, which has invested R21-million ($2.7-million), the South African Department of Water Affairs and Forestry, the Ikwezi Municipality and the University of Potsdam in Germany.

Other partners include the University of Tshwane, the National Research Foundation in South Africa, the German Society for Solar Energy, and German Water and Energy GmbH.

The pilot project is the first such facility in South Africa and encompasses the use of advanced water treatment, water recycling and improved sanitation technologies, enabling residents to access potable water within a short walking distance. The CWH is designed to service between 200 and 800 people at a time.

In the CWH, run-off from cooking and bathing, or grey water, is treated and re-used for laundry, sanitation and irrigation. Solar panels are provided to heat the water, boosting standards of hygiene and making the washing process more efficient. Other community benefits include a reduced need to transport large volumes of water over great distances and the creation of jobs for the construction and maintenance of CWHs.

After being drawn from its source, which may be a rainwater tank, borehole or tap, the water is put through a water treatment station and undergoes filtration, biological cleaning methods and UV irradiation, before being diverted to the community water outlet.

The DST plans to expand the technology to people in other municipalities. “We are confident that this cutting-edge technology will enable us to reach the last 12% of our people who currently have no access to safe drinking water,” said Hanekom.

The water savings from this innovative project are estimated at 10 m3 or 3 500 m3 per year, which is the equivalent of free public services for 150 000 people. The CWH website claims that water is used two to three times more efficiently; therefore more people can be serviced by the same amount of water. Some 50% to 70% of the community’s water is recycled.

In addition, energy demand is 100 000 kWh lower per year – as solar energy is used instead of fossil fuels. Access to electricity is not required, reducing the pressure on the environment.

“Our partnering with the DST and its project team aims to benefit the poor and contribute jointly to better livelihoods in South Africa,” commented German ambassador to South Africa Dieter Haller, adding that he was proud of the results of the science and technology partnership.

Germany and South Africa have collaborated extensively over the years in fields such as economy, biodiversity, defence, geoscience, environment, culture, development cooperation, and science and technology. The two countries have bilateral agreements in place in a number of areas and are currently involved in some 80 active projects with a total investment value of R951-million ($125-million).

The World Health Organisation states that as of 2002 only 58% of the entire global population had access to improved water, while access to proper sanitation stood at 36%. Many people have to travel long distances to get water from rivers and wells, while drinking from these unreliable sources increases the risk of contracting water-borne diseases such as cholera, hepatitis E, typhoid and dysentery.

Part of the United Nations’ Millennium Development Goals drive is to improve water supply across the world. The World Health Organisation reports that in order to meet the goal of halving the number of people without sustainable access to drinkable water and basic sanitation by 2015, an additional 260 000 and 370 000 people every day from now until 2015 must gain access to improved water and sanitation respectively.