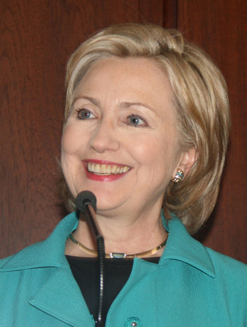 US secretary of state Hillary Clinton’s visit
to South Africa focused on strengthening
ties between the two countries.
Addressing the political situation in
Zimbabwe, pledging support for the fight
against HIV/Aids and building a better
trading relationship with South Africa were
also high on her agenda.
(Image: Nicky Rehbock) 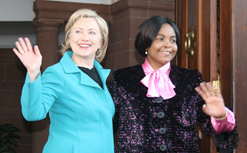 Hillary Clinton met South Africa’s Minister
of International Relations and Cooperation
Maite Nkoana-Mashabane at the
Presidential Guesthouse in Pretoria during
her two-day diplomatic tour of the
country. (Image: Nicky Rehbock)

South Africa looks set to benefit from stronger ties with the United States following US secretary of state Hillary Clinton’s two-day visit of the country from 7 to 8 August 2009.

Speaking at a press conference at the Presidential Guesthouse in Pretoria on 7 August, Clinton and South Africa’s Minister of International Relations and Cooperation Maite Nkoana-Mashabane pledged to work hard to bolster relations between the two countries.

“With our candour and creativity, through mutual respect, we can translate common thoughts into common action. The work that we do can translate to better lives. That’s why we’re strengthening ties,” Nkoana-Mashabane said.

“There’s a lot to be done … we have a formidable agenda … but the minister and I are going to make sure our two countries work together for a positive impact on the world,” Clinton added.

The commitment is welcomed after relations between the US and South Africa turned sour during Thabo Mbeki’s presidency, partly due to his denial that HIV causes Aids and his reluctance to put pressure on President Robert Mugabe over the deteriorating situation in Zimbabwe.

“There has indeed been a lack of coordination in our relations and we need to change that,” Nkoana-Mashabane said.

Clinton’s whistle-stop visit to the country formed part of an 11-day, seven-state diplomatic tour of Africa, which kicked off in Kenya and is due to finish in Cape Verde. Other stops are Angola, the Democratic Republic of Congo, Nigeria and Liberia.

The African tour – Clinton’s longest overseas journey to date as the top US diplomat – aims to affirm US President Barack Obama’s dedication to tackling troubled spots across the continent.

No surprise then that Zimbabwe was high on the US secretary’s agenda in South Africa.

“You have three to four million Zimbabwean refugees in South Africa. It’s a cost to you. In Zimbabwe services need to be delivered to the people … we’ll be working closely with South Africa when it comes to Zimbabwe,” Clinton said.

“We, as you know, are attempting to target the leadership of Zimbabwe with the sanctions we think that might influence their behaviour.

“In South Africa you are free and you are working together. It is tragic that your neighbours do not have the same freedoms.

“It is the responsibility of a leadership to do what it should to take care of its own people. I know that President Zuma is working very hard, as did President Mbeki before him, to try to change the attitude of the Zimbabwean leadership.”

Clinton said Obama had committed, during a visit in June 2009 by Zimbabwean Prime Minister Morgan Tsvangirai, that the US would provide more help on education, health and all the basic necessities Zimbabweans need.

Nkoana-Mashabane said, for its part, South Africa would continue to work with the people of Zimbabwe to press for the implementation of the power-sharing agreement signed by political leaders in the Southern African country in 2008.

One of the outcomes of Clinton and Nkoana-Mashabane’s meeting was a commitment to extend trading ties between South Africa and the US.

“We know the benefit of open markets and seek to deepen our bilateral relationship,” Clinton said.

Economic ties between the two countries have a “lot of room” to grow, she said, adding that she was keen to explore the possibility of the establishment of a US-South Africa business council.

“We’ll follow up on that in Washington next month.”

Encouraging South Africa to trade with its African partners, Clinton said trade levels within the continent were extremely low.

“South Africa cannot fulfil its economic potential if it exists as an island of relative prosperity amid a sea of untapped opportunity elsewhere on the continent.

“In Africa there’s a market of 800-million people – this is one of the issues the minister and I will put on our agenda for a bilateral dialogue.”

US support for fighting HIV/Aids

There, she said, “We have to make up for lost time,” referring to South Africa’s past policies on HIV/Aids and the previous government’s delay in offering antiretroviral drugs through the public health system.

Clinton’s aides confided that there were complications in trying to arrange a meeting with President Jacob Zuma, but the two finally got together on 8 August after the US entourage made a detour to Durban for the meeting.

Zuma affirmed Nkoana-Mashabane’s statement made earlier that Clinton’s visit would help improve relationships between the US and South Africa, particularly in light of both nations having recently elected new administrators.

“We are taking that relationship to a higher level,” Zuma said.

According to Clinton, the “very substantive” talks with the South African president dealt with issues including Zimbabwe, Sudan and Somalia – as well as ensuring that the two nations work more closely on meeting “regional and global challenges for the betterment of both nations and the world”.

At a dinner in Pretoria to honour her visit, Clinton said she was pleased to be in the country during August, which is Women’s Month. She added that building a thriving economy depended on women being drawn into economic life.

“There are so many examples of successful women in South Africa,” she said, noting that a focus on women was part of US foreign policy.

Absa CEO Maria Ramos, celebrity and business woman Basetsana Kumalo, gynaecologist and philanthropist Dr Precious Moloi-Motsepe, poetry icon Lebo Mashile and veterans from the 1956 women’s march on the Union Buildings were among the distinguished guests at the dinner.

“When I look at South Africa and I see the role that women played in the struggle for freedom and liberation, and the roles that women are playing now in every aspect of South African life, it is gratifying, but it is not satisfying,” Clinton told the audience.

“Too many women in this country and across Africa and across the world, including in my country, are marginalised, are left behind, are denied the rights that every human being is entitled to.

“We must remain committed to the full empowerment of women everywhere. And when we think about the poverty that grinds the spirit and the life out of so many women, we have to resolve to do our part, to make it easier for women to have the chance to live up to their God-given potential,” she said.

• Do you have any queries or comments about this article? Email Nicky Rehbock at nickyr@mediaclubsouthafrica.com