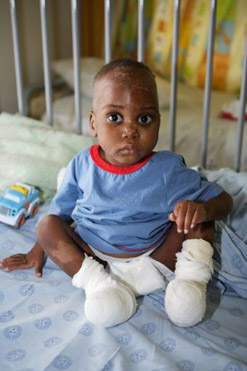 Zimbabwean toddler Tapera Jani at the
start of his treatment for both burns and
kwashiorkor at the Children of Fire
shelter in Johannesburg.
(Image: Irin Photo)

A few months ago Tapera Jani, a three-year-old boy from a farm outside Bulawayo in southern Zimbabwe, walked into a fire. The toddler was left with life-threatening burns to his legs and, in a country with a collapsed health system, no-one to help him.

Luckily the owner of the farm on which Tapera lived with his parents had heard of Children of Fire, a South African organisation which  rescues and rehabilitates children across the world who fall victim to fire.

In all developing countries, fire is the essential source of energy for poorer households. And whether it is in paraffin lamps, charcoal braziers or flaming piles of wood, fire will often cause accidents injuring, disfiguring and often killing those households’ children.

Children of Fire was founded in South Africa by journalist Bronwen Jones after, in 1994, she met Dorah Mokoena, a toddler who almost died in a shack fire in a squatter camp. The fire burnt off Dorah’s face, eyesight and hands – leaving her blind, her features melted into scar tissue, and with stumps at the end of her arms.

Jones and her son Tristan took Dorah into their home, where the girl, now a teenager, is a permanent member of the family. Unlike many, she has had the benefit of reconstructive surgery, with her nose and lips rebuilt, and some ability to communicate restored.

Dorah’s disfigurement made her the poster child for Children of Fire. She has helped attract the more privileged world’s attention to the horrific physical dangers millions of children face being born into families surviving on nothing.

With three-year-old Tapera, Jones and her team were ready to deal with his burns. But the toddler was also a victim of Zimbabwe’s collapse – its meltdown economy and nonexistent healthcare.

A citizen of a country that recently was the breadbasket of Southern Africa, the boy was suffering from kwashiorkor, a life-threatening form of malnutrition caused by a lack of protein – and a disease unknown in Zimbabwe 10 years ago.

“If Tapera had not died of his burns, he would have died of starvation in [Zimbabwean president Robert] Mugabe’s country,” said Jones, kissing the now-healthy and smiling child.

“He weighed 8.5kg when he arrived. We expected him to weigh double that for his biological age.”

Children of Fire, established in South Africa over a decade ago, is now registered as a charity in the UK. It has helped 70 children with severe burns and 200 from across Africa who required less complicated surgery.

“We continue to help the 70 children who need complicated surgery,” Jones said.

The organisation has come to expect complications in each case it takes up.

“There is poverty and HIV/Aids in the region – as we help to heal the children, we have to deal with all their problems,” said Jones.

“The ones we do, we know no-one else would help; for example, if the child is also HIV-positive.”

The organisation’s focus is therefore not on expensive surgery. Its more important work is helping children damaged by fire come to terms with their disability, cope with the social stigma of their disfigurement, and develop the courage to reintegrate with family, friends and society.

“I often end up being rude to people who stare at my children, despite my telling them not to do so, as it upsets them,” Jones said.

“Acceptance and getting people to see the child inside is perhaps the most difficult thing.”

Children of Fire works with a network of doctors, surgeons and healthcare specialists, most volunteers. The charity has never received government aid, and operates entirely on public donations, using volunteers from across the world.

“My son Tristan calls us a boot-camp for spoilt European students,” said Jones. Children come and go out of the house which serves as a home and office for the charity in Melville, a suburb of Johannesburg in Gauteng province. A school near the main building, with a staff of three teachers, helps educate the children while they are in the organisation’s care.

More than 90% of burn injuries across the world occur in developing countries, with 70% of these burn victims children, according to statistics from the Welsh Centre for Burns and Plastic Surgery in the UK and the Dow University Medical College Burns Centre in Pakistan.

According to Children of Fire estimates, at least 15 000 South African children are burned every year. The incidence of burning is higher in winter, when the need for warmth means more fires, and more chance for tragic accidents.

In South Africa’s five biggest cities an average of 200 people die in shack fires every year, according to Abahlali baseMjondolo, a South African shack dwellers’ movement.

Besides helping children with burn injuries, Children of Fire also tries to educate people shacklands and other poor and unserviced residential areas on preventing fires.

“These are simple measures such as not cooking on the ground [where children may easily walk into fires] and not allowing children to sleep alone with an open fire,” said Jones.

The organisation also provides construction materials and other household essentials to communities that have been victims of fire.

Jones has also been trying to get the authorities to implement a ban on the use of a particular brand of unsafe cooking stove that leaks paraffin oil.

“These stoves cost only about R40 (about $4), while the safer ones cost about R200 (about $20), which few residents in squatter camps can afford.

“I wish someone could help with cheaper, safer versions.”