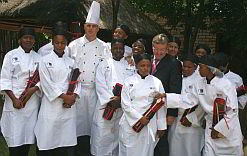 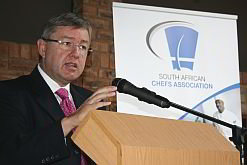 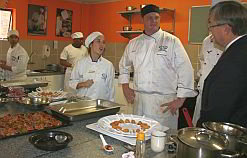 The kitchen of HTA School of Culinary Art
is a training ground for top chefs.
(Images: Bongani Nkosi)

The government’s job-creation drive has made its debut in the hospitality industry in the form of a young chefs’ training project.

Eight hundred young South Africans have started training to become professional chefs as part of the National Youth Chef Training Programme, a new scheme initiated by the Department of Tourism.

The department launched the programme on 24 February 2011 in Johannesburg at the HTA School of Culinary Art. The academy is one of several cuisine institutions in the country that will provide training.

The department has pumped more than R30-million (US$4.3-million) into the programme for the next three years, an investment which Minister of Tourism Marthinus van Schalkwyk said indicates a “vote of confidence” in the South African Chefs Association (Saca) and the scheme itself.

Saca will run the programme, and has selected schools in all nine of South Africa’s provinces to offer training. It’s a six-month course and another batch of students will be selected later in the year, according to Saca president Stephen Billingham.

Some 230 of the programme’s students are from Gauteng, while both KwaZulu-Natal and the Western Cape have 180 each. The Eastern Cape has 60, and 30 will be trained in each of the other five provinces. The number of enrolled students per province was influenced by skills demand in the hospitality industry.

The scheme is prioritising unemployed youngsters between the ages 18 and 35 with a matric qualification. A number of unemployed tertiary-education graduates have also joined the programme. “It must be open to young people with matric, but also other young people who are unemployed,” said Van Schalkwyk.

The young chefs who’ve joined the programme were enrolled free of charge. Billingham said the training opportunity has been advertised in major newspapers. “We’ve been advertising it over the last months. We’ll continue advertising it in the national press.”

Before being selected, candidates underwent interviews to gauge their interest and skills in cuisine preparation. Terrific passion is needed to make it into the programme, emphasised Billingham.

The student chefs will earn a stipend of R2 000 ($285) or more a month, according to the Saca president.

The government will look to the private sector to create sustainable employment for these youngsters once they graduate. Top hotels and restaurants are the favoured destinations for these upcoming pros, while the booming functions catering business also offers many opportunities.

“I would like to call on the private sector to really come to the table to assist us place these young people,” Van Schalkwyk said.

Nkwe Mayimela, a 27-year-old unemployed graduate from Pretoria, sees the programme as a perfect opportunity to edge closer to achieving her dream of owning a restaurant. She graduated with a national diploma in travel and tourism studies at the Tshwane University of Technology in 2010, but has battled to find employment.

“I applied for the programme because it’s for people without jobs,” Mayimela said. “I think it’s a great opportunity for me. I want to open my own restaurant in Pretoria.”

If the promise of Israel Molisaotsile, a chief strategist at the Youth Chamber of Commerce and Industry, is anything to go by, Mayimela is certainly in the right place.

Modisaotsile said the organisation is working with the Department of Tourism to train the young chefs in entrepreneurship. The youngsters will be enrolled at entrepreneurship programmes facilitated by the Youth Chamber of Commerce and Industry.

“Once they’ve been trained here [at culinary academies], we filter them into entrepreneurship programmes,” Molisaotsile said.

The aim is that the graduates from the National Youth Chef Training Programme will become job creators in their communities, and not just job seekers. “We believe that these students can create jobs. We have partners whose interest is to see to it that these guys create employment,” Molisaotsile added.