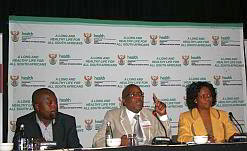 Health Minister Dr Aaron Motsoaledi has
decided to use ideas he learned on his
study tour in Brazil last year to revitalise
the public health system in South Africa.
(Image: Nosimilo Ramela)

South Africa’s Department of Health has announced plans to establish teams in each of the country’s municipal districts to provide primary healthcare services, maternal and child support, as well as care for those affected by HIV/Aids and tuberculosis (TB).

Minister of Health Dr Aaron Motsoaledi made this announcement at the 5th South African Aids conference, which was held in Durban and ran from 7 to 10 June 2011.

Motsoaledi said although the country has good treatment strategies in place, the health systems were failing in the provision of care.

By adopting the new model, the department hopes to increase the country’s life expectancy, decrease the rate of maternal and child mortality, reduce the burden of disease from HIV/Aids and TB, and improve the effectiveness of the county’s health system.

The minister attended a study tour in Brazil last year where he was impressed by that country’s successful public healthcare set-up. He decided to use ideas from some of the programmes he saw there to revitalise the system in South Africa.

Dr Yogan Pillay, deputy director general in the health department, said three streams had been lined up to achieve their goals.

The first stream consists of Primary Healthcare (PHC) teams – each with a professional nurse supported by four community health workers (CHWs). These teams will be assigned to each of the more than 4 000 electoral districts.

“Depending on the need of the area, an environmental health practitioner and health promotion worker will also join each team,” said Pillay.

Each team will go around the district, conducting assessments and providing healthcare to households in the area. The team will initially be responsible for 8 000 people with the aim to have 35% of households assessed and registered within the first year of the rollout.

The second stream is a school health services plan. A nurse will be assigned to a group of schools, with priority placed on educating pupils from poorer households. The nurse will do health assessments on the pupils, provide primary healthcare and do health awareness at the schools.

The third stream is the establishment of specialist doctor teams in each district. “The teams will consist of obstetricians, gynaecologists, family physicians and paediatricians among others,” said Pillay. He said the teams may be assigned to more than one district depending on the population sizes.

There are currently between 58 000 and 68 000 CHWs in the country, according to an audit by the Department of Health. However, Pillay said many of them were not appropriately trained.

He said in order to ensure the success and integrity of the department’s programmes, 5 000 CHWs would be trained or re-trained by the end of the year.

Pillay said National Treasury has given the department R338-million (US$50-million) in the current budget to fund the programmes.