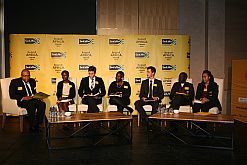 Youngsters from organisations like
Brightest Young Minds, One Young
World and the African Leadership
Academy took part in a panel
discussion on their vision for Africa.
(Image: Ray Maota)

The 2011 Brand Africa Forum, sponsored by Brand South Africa and Brand Leadership Academy, saw an impressive range of pan-African, diasporan and global thought leaders, influencers and decision-makers coming together to debate how Africa can drive its growth, reputation and competitiveness.

The event was held on 29 September at the Sandton Convention Centre in Johannesburg and attracted more than 300 government, business and civil society representatives.

Special focus areas included the role of the nation brand in economic development, governance and sustainability on the continent, economic lessons for Africa and the role of business in driving progress.

The significance of South Africa joining Brazil, Russia, India and China in the BRICS bloc was explored, along with lessons to be learnt from emerging markets.

The forum shone the spotlight on youth and their vision for the continent by including a panel of young leaders from Kenya, South Africa, Uganda and Senegal.

The inaugural Brand 100 Awards for Africa also took place at the forum.

In the opening address, Brand South Africa chairperson Anitha Soni challenged African nations to cooperate in developing strong country brands to improve the continent’s global competitiveness, adding that this would require better cooperation and information-sharing among countries on the continent.

“For us, Brand South Africa’s involvement in the Brand Africa Forum is a natural fit because the health of Africa’s brand is important for the strength and health of our own nation brand,” said Brand SA CEO Miller Matola.

Nation branding: we must walk the talk

“National branding is not about slogans, it is about what you do and what they think, that matters. If one does not change the negative perceptions they will become realities. In Africa we are good at talking and planning, but weak in implementing. We must walk the talk,” said Zimbabwe’s Deputy Prime Minister Dr Arthur Mutambara.

“A brand must transcend political affiliations and should not be the sole property of a set political party … it must be taken personally because we will never be respected as Africans unless Africa has done well as a continent. This applies to individual countries as well,” he added.

“We could be in for a 10-year bear market and recessionary environment. Where does Africa fit into this?” she asked. “We’re facing a very serious problem … there are simply not enough resources to go around.”

Moyo said in the coming years the world will increasingly struggle due to a shortage of arable land, energy constraints and a lack of food security, compounded by a lack of water.

“This is particularly in the context of the famine that’s going on in the Horn of Africa,” she added.

“There are about 1-billion people in the world who go hungry every day – and the majority of them are on this continent. And yet, Africa has the largest amount of untilled land left on the planet.”

As an economist, Moyo sees this in terms of supply and demand: “We’ve got hungry people, and we’ve got land.”

When there’s a food crisis in Africa, the first response of NGOs is often to “provide a so-called band aid solution, sending bags of maize to Somalia or Ethiopia immediately”.

Moyo said she doesn’t find this objectionable, but as an economist, she believes it presents a structural problem.

“We’ve got to get to the root cause: why is it that Africa, in the last 30 years, has been the only continent that has failed to feed itself – especially in light of the fact that we have the most untilled land?”

But there is some good news, she added: “In a future world of 9-billion people, in a world where we know there are going to be supply constraints in commodities and resources, Africa has an important role to play.

“But before we can actually get to a point where we are producing food and coming up with innovative ways to develop, we need to deal with Brand Africa.”

Moyo said Africans had to proactively discuss and respond to its important role in the future of the world.

“Without us getting our heads around this, it’s all just wonderful conversation – but it’s not going to help us in the long term.”

Addressing forum delegates, Moyo concluded: “I urge you in your discussions today – and when you return to your respective businesses – to really focus on where the world is going, and to also focus on Africa and its very important role in the future.

“The winners in the decades to come will be the people who look to Africa as a place of business opportunity and a place for partnerships – not as a place that is a drag on the world economy.”

What should Africa do to be a powerful continent?

Malik Fal, MD of Endeavour spoke about the Africa 2.0: Kenya Report. Endeavour is a New-York based NGO dedicated to the promotion of entrepreneurship in emerging markets.

The report is a manifesto of the envisioned economic and political transition Africa should take if it is to rightfully claim its spot as a powerful continent.

Fal said: “The manifesto is the collective effort of young Africans’ views about what Africa should do to be a powerful continent.”

Fal added that Africa was in danger of developing presidential monarchies, with leaders favouring their children to become future presidents. He said this was the same as a dictatorship.

The report, which comes out in October 2011, will have four main themes: uplifting Africans; creating and sharing African wealth; upgrading Africa’s infrastructure and creating a stable environment for growth.

Seeing Africa through the eyes of youngsters

Cedric Ntumba, an executive at Capitalworks Investment Partners, led a panel of youngsters in discussing their vision of Africa in the future and how their goals could be achieved.

The panel included Gertrude Kitongo of Kenya and Ralph Baumgarten of South Africa – both from Brightest Young Minds organisation; Zamatungwa Khumalo and Erik de Ridder – both of South Africa from the One Young World organisation; and Francis Ekii of Uganda and Linda Rebeiz of Senegal – from the African Leadership Academy.

Ntumba asked the panel what should be done to inspire African youngsters.

“Youngsters should be forward-thinking and their thoughts should sketch a positive future,” Baumgarten said.

De Ridder added that for the youngsters of Africa to be inspired, countries should have a human-centred approach to development and that young people should take ownership of the fact that they are the future.

Ekii said: “Youngsters should be proactive and not reactive to their situations.”

He cited an example of how, when he was just 13 years old, he and a few friends from his hometown in Uganda took it upon themselves to talk openly about HIV in the community.

BRICS and the role of Africa

A panel discussion on South Africa’s role in the BRICS grouping of nations was chaired by Abdullah Verachia, director of Frontier Advisory.

Chowdry said that for Africa to protect itself from the effects of the looming economic crisis, it had to indirectly help Europe by keeping its domestic consumption growing.

He said South Africa would play a direct role with its involvement in BRICS as the bloc would probably contribute money as a group to the International Monetary Fund.

Dr Vaidyan said: “India understood early on like China that population size is not a burden but an asset, and an asset should be maintained.”

Vaidyan said that although India had a large population; it had 18 000 colleges, 350 universities and 1-million schools to provide education to its citizens.

“The country also recognised that for urban India to progress, rural India has to be developed, that is why at least 40% of the loans we give are to small-scale farmers. South Africa needs to follow that route if it is to be a major player in the BRICS grouping,” said Dr Vaidyan.

Mahajan said Africa’s greatest challenge was its migrants overseas who talked negatively about their native countries, creating a warped view of the continent. Africa should make sure its “ambassadors” in foreign countries celebrated Africa, he added.

Speaking about competition between companies in the BRICS grouping, Mahajan said: “Africa should not just roll out the red carpet for companies from the BRIC grouping to invest in the respective countries on the continent, but should advocate for African companies to also invest in those markets.”

The inaugural Brand Africa 100 awards also took place during forum, giving credit to the continent’s most valued brands as voted for by pan-African consumers.

Research methodology for the awards was developed by the Brand Leadership Academy in partnership with TNS, a globally respected consumer knowledge and information company, and Brand Finance – the world’s leading independent valuation consultancy.

“One of the primary drivers of Africa’s growth lies in stimulating and growing thriving African and global businesses and brands in Africa,” said Thebe Ikalafeng, founder and chairperson of Brand Africa.

Ikalafeng added that consumers were the ultimate arbiters of a brand’s success and that the awards would show which brands are getting it right on the continent.

The winning brands were:

The most valued non-African brand went to Shell, while MTN was voted the most valued brand in Africa and took the Grand Prix award.