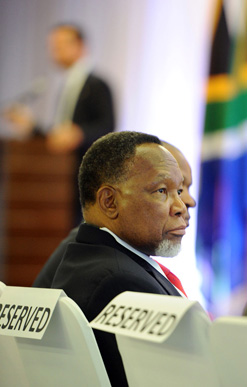 “More attention should be paid to producing a generation of young people armed with skills to meet the economy’s needs,” Deputy President Kgalema Motlanthe said in his address to Brand South Africa’s Competitiveness Forum.
(Image: GCIS)

Success over the past 20 years has brought South Africa to a crossroads, according to speakers and delegates at the inaugural Brand South Africa Competitiveness Forum. Two hundred delegates drawn from government, business, academia, labour and civil society gathered at Gallagher Estate in Johannesburg to discuss and exchange ideas around South Africa’s competitiveness and how to improve it.

Before breaking into five discussion groups – education, skills and labour, infrastructure, foreign direct investment, manufacturing and related services and governance and leadership – Deputy President Kgalema Mothlante set the tone for the day at the opening plenary by asking delegates to treat the forum as a platform to discuss building a brighter future for South Africa.

“We know enough what our challenges are; now we need to decide what we need to do about them.”

South Africa’s great leap forward from 1994 has spread the benefits of democracy and equality to most of its population, the deputy president explained, but problems remain. High rates of poverty and unemployment, especially among the young, are still intractable problems that need new solutions.

“We have also fallen short of the development trajectory necessary to place us on par with many of our competitors. We are acutely aware that improvement in the competitiveness of our nation is proportional to strides in these critical areas that define the character of our nation today.”

Using the National Development Plan, NDP Vision for 2030, as a roadmap for discussion, delegates were tasked with developing ideas to stimulate growth, reduce unemployment and poverty and narrow the inequality gaps still prevalent in the country.

Trevor Ndlazi, country director at the Reputation Institute, chaired the panel for the breakaway session on Governance and Leadership. In his welcome remarks he asked if the right to govern and lead are based on shared values and whether the nation has a common identity that can be harnessed to pull the country toward a flourishing future.

Dr Vuyo Mahlati of the International Women’s Forum and member of the National Planning Commission, argued that the successes of the past 20 years – universal education, increased access to basic services and growth of the economy – were built on a shared vision for the country, which in turn was based on a shared identity as South Africans.

The country is at the point where government and business need to strengthen co-operation to build on the foundation of the past two decades. Business has the skills needed and government the vision of a society it wants to create, Mahlati said.

“A councillor needs to understand that non-delivery of services is not just a local issue; it affects the way the country is perceived. Business has to understand that they cannot work to maximise profits without considering the environment in which they are active.”

Professor Dirk Kotzé, of the University of South Africa (Unisa), pointed out that the successful emerging economies held up as good examples, or to which South Africa is often compared were not democracies when their economic miracles began. Malaysia, Korea, Hong Kong and even China were one-party states with one vision and the political will to put plans into actions.

Professor Kotzé added, “South Africa has the opportunity to define what is economically possible in a democracy.”

Responding to a question about how a state is defined he used South Africa’s successful electrification programme to illustrate the different routes that the country could follow.

“Do we choose to continue providing electricity and other services to someone who can’t afford them, a social democratic system? Or do we embrace business-friendly policies that will grow the economy and provide this person with a job and then ask them to pay for the services?”

“As a nation success is based on universal education, skills development and good governance. It is defined by the greater good our wealth of natural resources can create rather than the personal wealth that can be accumulated.”

Vigorous debate between the audience members began with an interesting dilemma. Some audience members were long-term residents in South Africa, not citizens; they felt uncomfortable participating in the conversation. They did however raise a point that had not been discussed previously, saying government could not ignore how social media would change how people are governed, especially at a local level. Government can learn, from business, how to respond to the influence that platforms such as Twitter and Facebook have.

The breakaway discussion resulted in five points taken back to the plenary.

• South Africa is blessed with a much-lauded constitution and institutions; however the gap between government policy and action needs to be addressed.
• What it means to be South African needs to be defined; this vision of “who we are” and “what values mould us” needs to be the foundation of a nation branding programme.
• Leadership based on those shared values need to be encouraged and promoted.
• There needs to be a clearer understanding of the values that underpin governance.
• The developed economies that are held up as development models for South Africa were not democracies at the birth of their economic miracles. South Africa has an opportunity to develop a unique development model based on democratic principles.

Ndlazi, while acknowledging that the group’s report was vague, said this conference was the first step of a challenging journey, and that South Africans needed to remind themselves of the country’s successes and not just fixate on the challenges.

“We have more than tripled the size of our economy since 1994,” Gross domestic product in 1994 was $136-billion; last year it was $400-billion according to a Goldman Sachs report released the day before the conference. “If we focus our energies we can do so much more while building a society with the shared value of effecting maximum development whilst still maximising profit.”