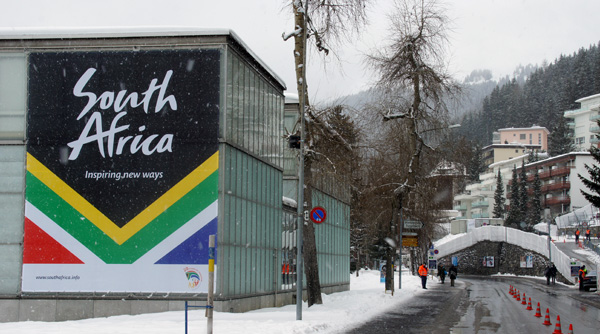 At the World Economic Forum‘s 2014 meeting in the Swiss town of Davos, Brand South Africa’s high-powered delegation – represented by government, business, the media and arts, and social investment initiatives – will spread the word to the world’s elite that South Africa is a globally competitive nation, open for business. And now is the time to invest.
(Image: Brand South Africa. Click for a larger view.)

The World Economic Forum has unearthed historic photographs of Nelson Mandela at its annual meeting in Davos: in 1992, two years before he became South Africa’s first democratically elected president, and 1999, the final year of his presidency.

What are South Africa’s prospects in the global economy? The Mail & Guardian puts your questions to trade and industry minister Rob Davies, Colin Coleman of Goldman Sachs and communications minister Yunus Carrim, in a Google+ Hangout hosted in partnership with Brand South Africa.

It’s a long way from Mabopane to outer space, but Mandla Maseko has strapped on his boots and is on the way there. The young DJ will be the first black African astronaut, after beating a million or so contestants to win the global Axe Apollo Space Academy competition.

The internet wouldn’t exist if it weren’t for smart people at universities, but it also wouldn’t be what it is today if it weren’t for savvy investors. Researchers and business need a good relationship for society to benefit – and research funding in South Africa is among the highest in the world.

In the underground noise, dust and darkness of South Africa’s deep-level mines, efficient communication with the surface is essential for streamlined operations – and to save lives. A new innovation by the Council for Scientific and Industrial Research does just that.

South Africa is actively involved in the economic integration and development of Africa, building much-needed regional infrastructure, promoting the continent’s interests on the global stage, and forming partnerships and free trade agreements with other African countries.

Sixteen years. In that time South Africa will be a very different country, if the goals of Vision 2030, as set out in the National Development Plan, are met. The aim, among others, is to eliminate poverty and create 11-million jobs by the year 2030.

South Africa ranks at a respectable 53rd in the World Economic Forum’s Global Competitiveness Report. It is second among the Brics countries, and many aspects of its financial sector are rated the very best in the world.

Four years ago, the head of Siemens made a commitment to Nelson Mandela – to build a school in Mvezo, the quiet rural village of his birth. That school, a state-of-the-art science and technology secondary institution, has now opened to great fanfare.

Slow but steady: South Africa’s economy on the upward path

International economists predict steady growth in the South African economy over the next year, one sign that the country is increasingly competitive globally – and is attracting substantial interest from Chinese investors.

Trade efficiency inside Africa is set for a major boost when three regional economic communities sign an agreement in June to establish a massively enlarged free trade area encompassing 26 countries in southern and eastern Africa – roughly half of the member states of the African Union.

In 1999, five years into South Africa’s democracy and in his final year as president, Nelson Mandela addressed global luminaries gathered at the World Economic Forum in Davos. His speech is now 15 years old, but much of it still resonates in South Africa, and in the global economy. Watch the video, and read the transcript.

WEF Davos 2014: Keeping up with a fast-changing world

Profound political, economic, social and technological forces are transforming our world, according to the World Economic Forum. The trick is in how the world responds – a topic the forum will address at its annual Davos gathering in late January. And South Africa will be there.

“It will be an exciting meeting,” World Economic Forum founder Klaus Schwab said of the organisation’s 2014 Davos gathering, at a news conference on Wednesday. “It will be different from last year’s, because it will not be overshadowed by one single crisis.” Schwab characterised the context of the 2014 meeting by three things: cautious optimism, diminished expectations, and many known unknowns.

Mandela and the making of a woman

Zelda La Grange grew up cocooned in white Afrikaner privilege, terrified of “the terrorist in jail”. But her story is one for all South Africa: she became Nelson Mandela’s personal secretary, and in doing so moved beyond the narrow confines of prejudice of all kinds.

Nthabiseng Hibbert is an ordinary South African woman who, for the past two decades, has lived in a modest home in Katlehong, one of the country’s largest – and poorest – black urban townships. Only one thing sets her apart from her neighbours: Nthabiseng is white.

Taking the helm at South African Breweries in 1999, Graham Mackay grew the company’s stock value by
1 000% in 14 years. Now SAB Miller is the largest beer producer in China and South America.