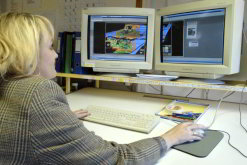 The local branch of the multi-national
Business and Professional Women will
strive to ensure that women get more
opportunities in the business world.
(Image: MediaClubSouthAfrica.com. For
more free photos, visit the image library)

The local chapter of the international organisation Business and Professional Women (BPW), a fairly new entity in South Africa, is set to launch a national campaign to bring about change in business principles and the Companies Act so that women will have more of a say in decision- and policy-making, and be better equipped for their respective roles.

BPW has had consultative status with the UN through the Economic and Social Council since 1947. At present there are a total of 21 members serving as representatives at the UN and its subsidiary organs, specialised agencies and related organisations.

It has 90 branches in 80 countries throughout the world and assisted the UN in the promotion of its Women’s Empowerment Principles, a joint initiative of the United Nations Fund for the Development of Women and the UN Global Compact (UNGC).

The Department of Trade and Industry’s South African Women’s Entrepreneurial Network and BPW signed a memorandum of understanding in November 2010 and, together with the UNGC, will collaborate on projects pertaining to the empowerment of women.

These include a register of women who are ready to sit on boards but have been overlooked, certification for businesses owned by women, and corporate governance training for women-owned businesses, particularly the small to medium enterprises. The DTI will give its accreditation to all courses.

In a letter to BPW, UNCG’s executive director Georg Kell commended the organisation and expressed his hopes that equality for women in business would become one of its priorities.

At the fourth conference of the Alexandria Businesswomen Association in Egypt in October, BPW South Africa president Toni Gomes gave a presentation on the forthcoming national Equality Means Business campaign. Women at the event also took the opportunity to exchange new trends and methodologies.

“As a delegate at the Alexandrian conference,” said Gomes, “I was enthralled at the work being done for women’s empowerment in the Arab countries.”

She added, “The majority of Arabic women are in fact highly qualified businesswomen and professionals who hold very senior positions in the workplace.”

Gomes believes that, despite the differences in culture, South Africa can learn a tremendous amount from Arab countries on advancing women in the business world.

She recently returned from Berlin where she attended the inaugural International Businesswomen Forum. Here she presented a paper on women’s empowerment and spoke on the BPW’s upcoming campaign.

As a registered non-profit organisation, BPW South Africa is looking for sponsorship to ensure sustainability. Once the campaign is launched, corporate partners may choose one or more principles with which to work toward their common goals.

Representatives from BPW and Internationale Weiterbildung und Entwicklung gGmbH, a government funding agency in Germany, have met for discussions but have not disclosed the amount of funding, if any.

In April 2010, prominent women from Germany, South East Asia, Egypt and Southern Africa attended the North Rhine-Westphalian Businesswomen’s Convention held in Gelsenkirchen, Germany. The prevalent Icelandic volcanic ash and its effects did not deter the women, who made alternate arrangements to get to the venue and were able to exchange new ideas for developing their own conferences.

An international strategic workshop also took place, where the delegates discussed how to maximise the economic potential of women, among other important topics. Internationally there is a growing awareness of how the role of women as entrepreneurs can influence political stability and economic development.

The World Bank, UN and the International Labour Organisation have programmes in place which focus on starting a small business and getting access to micro-credit. The push now is to develop strategies to strengthen the economic role of women entrepreneurs.