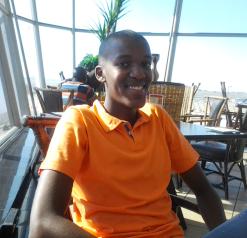 18-year-old Sekgabo Motshwane is one
of the first generation of South Africans
born into the newly established democracy.
(Image: Faith Talane) 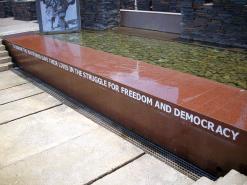 The Hector Pietersen Museum is one of
a number of commemorative sites
that pay tribute to the people who fought
to free the country from oppression.
(Image: Wikipedia)

The “born frees” turn 18 this year, coming of age at the same time as a democratic South Africa. While they acknowledge the struggle, for them the future is more important than looking back to a past that happened before they were born.

It was on a tour of some popular heritage sites in Soweto, in Johannesburg’s south-west, in the winter of 2011 that 17-year-old Sekgabo Motshwane first came face to face with the reality that is South Africa’s apartheid history.

Motshwane turns 18 in December this year, which makes him as old as South Africa’s democracy. He is one of over 600 000 people born in 1994 into a democratic South Africa, according to Statistics South Africa.

This, he says, seems to be of more importance to his parents than it is to him.

“Don’t get me wrong,” he qualifies. “I have a great deal of respect for the freedom struggle and its heroes … I’ve heard everything from how people stood in long queues all day to cast their first-ever votes and how communities in townships all over the country celebrated well into the night.”

For him, however, it is immaterial that he was born in 1994, the year that everybody got to vote. Like many teenagers on the threshold of adulthood, he is looking forward rather than back to the past.

“Frankly, my main concern is the future ahead of me.”

And like Motshwane, South Africa is also standing on the threshold of adulthood. But unlike him, its future is closely tied to its past – the long, hard fight for freedom and the struggle against apartheid.

Motshwane is a Grade 12 pupil at Boksburg High School on the East Rand in Gauteng. He plans to study mechanical engineering at Johannesburg’s Wits University after high school and says many of his friends are also looking into careers in the technology and medical fields.

“One thing that I‘m grateful for in a free South Africa is that I can be and do whatever I want – my future is in my hands,” he explains. “My parents’ generation knew about career choices available to them, but had limited resources to enable them to go after their dreams.”

The revealing trip to Soweto was organised by a relative, an aunt, who wanted to help “open his eyes” to the reality of life in South Africa before 1994.

He readily admits that although he understood the tour was meant to be an educational one, before setting off, the highlight for him was the prospect of his first bungee jump at the famous Orlando Towers. This was slipped into the trip as an added incentive.

But Motshwane says that what he came across at the Hector Pieterson Memorial and Walter Sisulu Square of Dedication – illustrations such as photographs, documents and videos depicting highlights of the freedom struggle – proved to be more than he had expected.

Being in the moment, as it were, with struggle heroes gave him the opportunity to learn to appreciate the freedom he enjoys today.

“I would say I had mixed feelings regarding the information I received during the tour. I was a bit angry, but more so motivated to do more and be more,” he says.

Apart from the history he learns in the school curriculum, Motshwane had only heard anecdotal descriptions of what life was like during apartheid from his parents and other members of his family, so his blasé attitude towards all things political was to some extent excusable – and probably typical of his generation.

Ideals of a born free

Motshwane, by his own assertion, cannot imagine himself living anywhere else in the world other than South Africa. “What good is our freedom if I’m not going to enjoy it living here?” he asks.

He wants to travel, a lot, but relocation is out of the question. “I went to Zambia recently and while there I realised how far advanced South Africa is in terms of infrastructure. I don’t think I could cope under the circumstances I saw.”

His passion is design: “When I’m older I’d like to be able to look at things and say ‘I made that, and it made someone happy’, and I feel like I have better opportunities here at home.”

The road to that ideal, however, has its obstacles: Motshwane knows his future is in his hands. “Everything I want I have to be prepared to work hard for, which is understandable.”

But he does question what is being done for the young people who have nothing. “If you’re poor in this country then your future depends on politicians,” he says, questioning how seriously the government takes its people.

How in tune is this young man politically, it may be asked.

“That’s what I’m worried about. [Politicians] getting richer and richer at the expense of ordinary people.”

Motshwane’s assertions are not far off the mark for people in his age group, according to the Human Sciences Research Council’s SA Social Cohesion Barometer, which was released in November 2011. The report says the age group between 16 and 19 is significantly less civically cohesive than older age groups, meaning they are unlikely to take part in what others perceive as civil duties – like voting, for instance.

However, the group is far more tolerant towards immigrants and gay people and has much more interracial contact.

This rings true for Motshwane, who says that despite being eligible to vote in the next national elections – in 2014 – he hasn’t found anything inspiring from political parties. “My vote will most probably be motivated by what I want for my future.”

He admits to having loyalty issues regarding the country’s ruling party, the ANC – given its part in the struggle – but beyond that, he has no feelings at all.

“When I went to Soweto I got to appreciate how much struggle heroes sacrificed for me to be able to have a good future … I saw things there that I didn’t think I would see in my lifetime,” he adds.