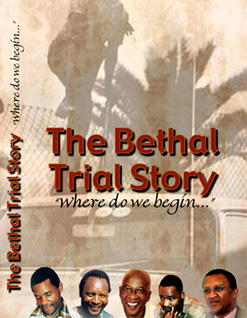 The story of the Bethal trial will soon be
widely available in all libraries across the
country.
(Image:David Krut Publishing)

Living to tell the tale: from Left, Rodney
Tsoletsane, Biza Matsobane, Lawrence
Ntlokoa, Templeton “Pops” Mageza, and
Mike Matsobane are reunited at the launch
of the book.
(Images: Khanyi Magubane)

A newly released book details the harrowing experiences of activists charged with treason during the Bethal trial, which was held in complete secrecy from 1978 to 1979 and reportedly became South Africa’s longest political trial.

The Bethal Trial Story: Where do we begin… follows the young student activists of Mosupatsela High School in Krugersdorp, west of Johannesburg, and the role they played in the June 1976 uprisings.

The publication has officially been adopted as part of the Gauteng provincial government’s Political Heritage Collection.

The collection was launched in 2002, and includes books, videos and tapes written and produced by political leaders, and those who documented the political tensions and struggles in South Africa during apartheid.

Most of the material included in the collection was written during the apartheid regime and banned that government.

It was therefore inaccessible to the public at the time.

The collection was inspired by a need for South African libraries to transform their book and historical periodicals, to accurately represent the country’s diverse political history.

Both hailed the book as a crucial part of South African history.

“The value and significance of documenting our life-changing experiences cannot be overstated.

“The stories that shaped our course of history must be narrated and preserved in various forms, so that generations that follow can insight about how this nation was mold,” said Mokonyane in her speech.

Born and raised in Krugersdorp, Mokonyane said the book has affected her personally, as it reminded her of her journey in politics.

“As an activist whose home and primary constituency has always in Mogale City (The new name for Krugersdorp), I am fully aware of the history detailed in this book.

“The school itself [Mosupatsela High School] is my beloved alma mater.”

Mbatha-Mthimkhulu highlighted the importance of supporting initiatives that sought to tell the South African story.

“The reason why we deem it fit to support the launches of books to celebrate our heritage is because they play such an important role in shaping perceptions of who we are as people in the eyes of humanity.

“Without this sense of identity, we are nothing as people,” she said.

Former president Nelson Mandela was accused number one due to his passionate opposition to segregation in South Africa.

On 11 June 1964, at the conclusion of the trial, Mandela and seven others – Walter Sisulu, Govan Mbeki, Raymond Mhlaba, Elias Motsoaledi, Andrew Mlangeni, Ahmed Kathrada and Denis Goldberg – were convicted. Mandela was found guilty on four charges of sabotage and like the others was sentenced to life imprisonment.

The book traces the rise of five school representative council students and activists, Templeton Mageza; Themba Raymond Hlatshwayo; Rodney Tsholetsane; Molathegi Thlale and Lawrence Ntlokoa. The five were recruited to join the liberation movement by Mike Matsobane, a popular activist at the time.

Armed with a new political awakening and influenced by the writings of Steve Biko, leader of the Black Consciousness Movement, the students encouraged and mobilised their fellow pupils to rebel against the use of Afrikaans as a medium of instruction in non-white schools.

The students became the target of the apartheid government’s security police and were often threatened and intimidated.

Because Kagiso, the township of Krugersdorp, was a small community during the 1970s, the security officers also knew the families of the “troublemakers” and threatened them with arrests and detentions.

Not to be deterred, on 17 June, a day after the famous 16 June uprisings, students in Krugersdorp also took to the streets, resulting in a violent clash between students and the police force.

In the aftermath of the student protests, Hlatshwayo, Thlale, Tsholestane, along with Mike Matsobane, were arrested and detained until January 1977.

During this time, the students and Matsobane reportedly endured severe torture from state police, which they testified to during their trial.

In the months following their release, an extensive charge sheet was compiled against the students and eight other defendants who were all grouped together to form part of the trial.

A trial of secrecy and betrayal

The trial took place in Bethal, then falling under the Eastern Transvaal region, now known as Mpumalanga.

Charges against the 12 focused on the contravention of the old Terrorism Act of 1967.

The defendants were from different parts of the country and had been involved in different, what was deemed ‘terrorist activities”, by the apartheid government.

A big blow to the defendants was the appointment of Judge D J Curlewis, who was widely known as a racist Nationalist.

“Curlewis has always had a dubious reputation for heavy-handedness and his adverse comments in … political trials he p5resided over are the stuff of legend. His handling of the Bethal trial was arguable the most controversial performance of any by the select group of apartheid judges.”

Most worrying to the accused was Curlewis’s reputation of handing down death sentences to those who had previously faced similar charges.

Curlewis ordered that the trial be held in-camera, and banned the public and the press from covering it.

During the 18-month trial, 168 state witnesses were brought to testify against the students. These included members of the same communities the defendants were from, who were forced by the state to testify.

In the book, one of the defendants and authors of the book Rodney Tsholestane, recalls the betrayal they felt when close community members testifying against them.

One of these was a Mr Sejanamane, who was a local primary school principal in their home town of Kagiso.

“Actually, he was also our neighbour at home. He backed up this false allegation that I had been training people [to rebel against the state]. He said I did it. He was under duress to say this, of course, but there was a pay-off for him.

“That same school principal gave false witness against many people, but I would say it was the worst against me because he was a friend of my father.”

According to the book, some of the techniques used by the police to recruit informants or cooperatives included accommodation at “nice” police stations, cars and pocket money.

At the end of the trial, the Kagiso group, made up of the student activists from Krugersdorp, were found guilty and served their respective sentences at various prisons across the country.

Shedding light on the Bethal trial

Now, 31 years after the traumatic experience of standing trial as students, the authors felt it necessary to tell their story.

The process of writing involved extensive research at the Historical Papers Archives Unit at the University of the Witwatersrand.

According to Templeton Mageza, popularly known as “Pops” the hours spent at the library were like travelling back in time.

“We would spend hours and hours reading the available material. When it was time for the Unit to close, it was like they could keep it open for another hour.

Biza Matsobane, a fellow student activist at the time in Krugersdorp, said the book is long overdue.

“We, as a people from the West Rand, have failed to document our political history, and that is the biggest betrayal to any people.

“We don’t pretend to have given a comprehensive account of our history, but at least we found a place to begin,” said Matsobane.