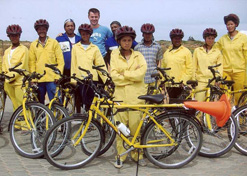 Bicycles offer an efficient way for rural
road workers to get on site. 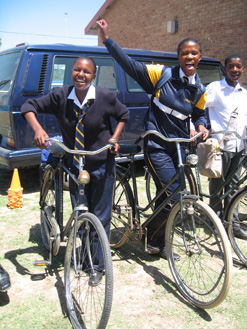 Girls from Luhlaza High School in
Khayelitsha are delighted at their
increased mobility. 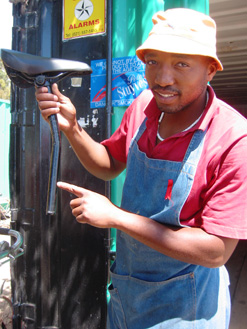 Meshack Nchupetsang at work in the
Westlake Bicycle Empowerment Centre. 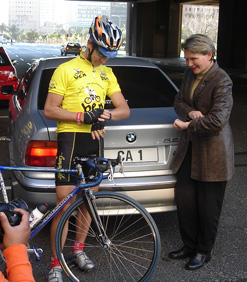 Our world seems a mess. Greenhouse gases are choking the planet, the cost of almost everything is skyrocketing, and people spend so much time either at work or commuting, they hardly get to see their families.

Technological development hasn’t really freed us from the drudgery of manual labour – it’s just created another form of drudgery. People work so hard to afford the trappings of “the good life” they hardly ever get to appreciate all they’ve accumulated.

That’s just some people, though. The rest – the vast majority – are desperately trying to get by, struggling to find work, feed their families and educate their children. They live in areas with limited infrastructure so they end up paying more for transport, electricity and other services. And both the have-lots and have-nots spend far more time in traffic than is healthy.

These problems sometimes seem insurmountable. If only there was a magic pill that could make it all better – clean the air, give us time to get some exercise and smell the daisies. There isn’t a magic pill, but there is a fabulous invention that can effectively address a number of these issues.

Devised by Englishman James Starley in 1869, this spectacularly efficient machine was embraced with enthusiasm at the time, but it is only in the last few decades that its many advantages have been recognised.

It’s not exactly a magic pill, but it has the potential to solve some of the world’s ills. And the Bicycle Empowerment Network (BEN) is one of many organisations that advocate this humble invention as an effective tool in reshaping our world for the better.

BEN’s goal is to promote the use of the bicycle to improve mobility, health, access to education and community cohesion, create jobs, empower people and offset carbon emissions.

To do this, the organisation has three main programmes. It distributed bikes to people who need them, trains these people in bike maintenance and road safety, and works with national and local government to develop effective bicycle infrastructure, particularly in the Western Cape.

BEN grew out of Afribike, an organisation set up to distribute bicycles to people who could not afford to buy them. In 2000 Louis de Waal and Andrew Wheeldon were, separately, asked to help manage the Western Cape section of Afribike, which they did. It didn’t last long but, out of its ashes, BEN rose in February 2002. In August that year Wheeldon took a fund-raising trip to the US and Europe, and returned with enough resources to get BEN running sustainably.

In the US he met with the Institute for Transportation and Development Policy (ITDP) and managed to secure four years of funding for BEN, to tie in with their Access Africa project and supply California bikes to people in the Western Cape.

Wheeldon then went to Utrecht in the Netherlands, and met with the Interface for Cycling Expertise (ICE) from whom he secured funding for a four-year project called Locomotives, or Low Cost Mobility Initiatives, which was aimed at working in cities to improve cycling infrastructure at every level.

The project ran from 2003 to early 2007, after which the Bicycle Partnership Programme, which provides direct assistance to municipalities to look at bike planning, replaced it. Through BEN, ICE has chosen partners in three focus cities in the world: Nanded in India, Rio de Janeiro in Brazil and Cape Town.

Not a free ride

Most of BEN’s donated bicycles go to schoolchildren to help them to get to school safely, quickly and cost-effectively. The organisation also donates bikes to home-based health workers, rural road workers and community-based organisations.

The bicycles come free of charge, but there is a sweat equity involved. Recipients must attend a two-day workshop in bicycle maintenance and road safety before they take possession the bikes.

Most of the bicycles are new, but some are rebuilt second-hand cycles from Europe. BEN started off in 2002 with ITDP’s California bike, a low-cost, high-quality and rugged bike that is great to ride and easy to maintain, designed especially for conditions in developing countries. After handing out more than 2 000 California bikes, BEN formed a partnership with Shova Kalula in 2004 and began to distribute the Giant Commuter Bike.

Shova Kalula, isiZulu for “pedal easy”, was started by the then South African minister of transport, the late Dullah Omar, 2000. The programme originally aimed to distribute 1-million bikes throughout South Africa by 2010 by appointing service providers in each of the nine provinces, a process that is still under way with some of the provinces not yet on board.

The programme hit a few hitches but by 2004, when BEN became the Western Cape service provider, it had been revived. The initial target of 2010 was a bit ambitious, but there is a good chance that the million bicycles will be distributed by 2015.

Safety on the road

When BEN donates bikes to schoolchildren they work out the route that each child will travel to school. With the children they identify high-risk areas such as large intersections, and devise ways to minimise risks.

They also encourage the implementation of school “buses”. These are not big diesel-belching behemoths, but rather a group of learners who all live in the same area or along the same route. The older children in the group start off to school, picking up the younger bus members en route, and at the end of the day escort them home, ensuring greater visibility, safety in numbers, and security for the littler cyclists.

While BEN trains all the recipients in basic bicycle maintenance, the organisation also recognises the business opportunities that can be accessed, particularly if the number of bicycles in an area increases. To this end they have set up Bicycle Empowerment Centres in a number of Western Cape communities.

These are small business opportunities for the unemployed, who are trained in bicycle maintenance and business skills, and then helped to set up a bike repair facility. So far, eight centres are up and running. There is one in the pretty Boland town of Riebeek Kasteel, one in the depressed, drought-stricken Karoo town of Merweville, and six in Cape Town – one each in Mitchell’s Plain, Masiphumelele, Westlake, and Capricorn Park, and two in Hout Bay.

Probably the most important long-term programme BEN is involved in is the creation of bicycle infrastructure in cities.  In March 2006 the organisation successfully won the rights to host Velo Mondial in Cape Town.

Wheeldon was the chair of NMT between June 2006 and June 2008, but it is now being driven by the City of Cape Town, although BEN is still involved. Other than BEN, the forum is made up of road engineers, consulting engineers, the Pedal Power Association, University of Cape Town Department of Urban Planning and Built Environment, and representatives from the Western Cape Departments of Transport and Public Works, and the City Council Environmental Resource Unit and its Department of Transport. The NMT forum meets monthly to discuss the planning, budgeting and implementation of non-motorised transport infrastructure projects.

The plan is to make Cape Town a truly bike-friendly city where people can commute by cycle to work and school in safety in a scenic and traffic-free environment. So far, the NMT has started construction on a bicycle and pedestrian route that will stretch from Rondebosch to Salt River, following the Liesbeek River and traversing the proposed Two Rivers Urban Park. It is scheduled to be complete by June 2009. Other aspects of cycle infrastructure include safe bike parking and showers as standard in office blocks.

Sounds good, you might think, but who has time to cycle to work? To get an answer to this, Wheeldon challenged Helen Zille, the mayor of Cape Town and leader of the opposition Democratic Alliance, to a race – she in a car, he in on a bike.

Zille, an incurable workaholic and one of the busiest people in Cape Town, gladly agreed. Racing Wheeldon from her office to her home, she started off by pulling away from him but had to watch him zip past her once she hit the traffic, and found him leaning on his bike at the garden gate when she got home.

The 8km trip took 13 minutes by bicycle and 21 minutes by car. Let’s not even get started on the costs involved.