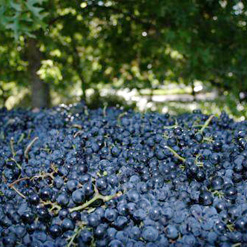 The first step in Backsberg’s green wine
initiative was a carbon audit, which
assessed the amount of CO2 produced
from all winery activities, from vineyard
to bottle. 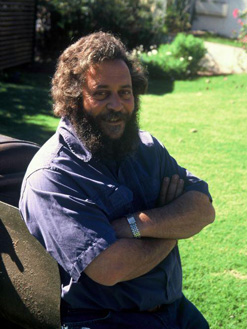 Michael Back, proprietor of Backsberg
Wine Cellars and environment nut. 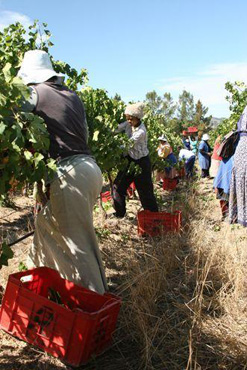 Vineyard planting systems have been
adapted to reduce the number of wooden
poles needed.

Red or white wine? At South Africa’s Backsberg Wine Cellars there’s another choice: green. That’s because Backsberg has become one of only five wine producers in the world making carbon-neutral wines.

Carbon neutrality means all the carbon dioxide (CO2) released into the atmosphere in the wine-making process is balanced by planting trees to absorb the equivalent amount of CO2 from the atmosphere. The other four carbon-neutral estates are Grove Mill Winery in New Zealand, Parducci Winery in California, ConoSur in Chile and Elderton Wines in Australia.

Backsberg, which lies between Paarl and Stellenbosch in the Western Cape, is owned by Michael Back. Known as something of an “environment nut” on the estate, Back began his green wine initiative in 2004.

“Care for the environment means care and concern for succeeding generations,” he says. “As custodians of the land, it is our duty to understand and recognise potential threats, and to mitigate against them for the benefit of the next generation.”

The first step was a carbon audit, to assess the amount of CO2 produced from all winery activities, from vineyard to bottle – its “carbon footprint”.

A carbon technician measured everything from electricity and fuel consumption to grape fermentation and transport of wine bottles to local and international destinations. Each activity was then calculated to produce a specific amount of CO2. The entire process followed the strict guidelines set out by the Kyoto Protocol on greenhouse gas emission.

From the audit results, the carbon technician calculated the number of trees that should be planted every year to absorb the same amount of CO2 Backsberg produced in that year. This is known as “offsetting”.

Backsberg then enlisted the help of South African non-profit organisation Food and Trees for Africa (FTFA). In 2006 FTFA was honoured with the Chevron Conservation Award in California for improving the quality of life for disadvantaged South Africans by planting 2.5-million trees.

FTFA and the estate began a village greening programme in nearby Klapmust, an impoverished village that is home to the surrounding wine farms’ seasonal workers. The Klapmust community took the more than 900 trees on a voluntary basis, trees the estate continually monitors to ensure they remain alive and continue to keep Backsberg’s carbon offset in balance. On the estate itself, 3 442 additional trees have been planted over the last 10 years.

But Back wanted to do more than simply get a logo on his bottles. A committed environmentalist, he was determined to reduce the estate’s carbon footprint as much as possible. The estate now employs a fulltime environmental consultant to look at all aspects of the business and assess how they could be done in a more environment-friendly way.

The estate now has a package of creative green ideas. All farm vehicles and tractors are run on biofuels made from recycled vegetable oil, and the large fuel-guzzling tractors have been traded for smaller ones. The estate now generates its own energy from solar power, and is looking at wind power. Energy demand has been reduced by implementing timers, low-energy bulbs and skylights.

The old hot-water “donkey” system, last used over a half a century ago, has been reintroduced, using waste wood to heat the water for washing barrels. Vineyard planting systems have been adapted to reduce the number of wooden poles needed.

Back has also reserved 10% of the estate for conservation of the natural habitat, some 40 hectares of Swartland alluvium fynbos. This delicate fynbos environment, one of only a few left in the area, will never be cultivated, even though it might hold soils suitable for more vines.

Backsberg remains the only carbon-neutral wine producer in South Africa. But according to John Spiers, chief executive of the estate, other South African winemakers are increasingly interested in environment-friendly production. He said Backsberg’s green initiatives were fairly inexpensive, and will save money in the long term. “It makes good economic sense if you look at where the fuel and energy prices are going,” he says.

More than this, Backsberg exports 35% to 40% of its wine to the US, UK and Europe. Recent market feedback from Wines of South Africa (Wosa), which markets South African wine internationally, indicated that the British, American and especially the German markets seek environmentally responsible products. “These three destinations want products that are not only linked to social issues, but also environmentally responsible,” says Andre Morgenthal, Wosa communications manager.

Spiers believes it is still early days for the carbon neutral logo to play a deciding role in the minds of the international consumer. But he adds: “In future it will become very important, and then we will definitely benefit from it.”