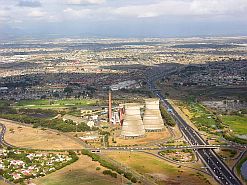 The land on which the Athlone Power Station sits in Cape Town will be revamped into a mixed-use district that will include residential houses, government and private business buildings.

The City of Cape Town said its Spatial Planning and Urban Design Department has concluded a pre-feasibility study into the redevelopment of the area in and around the Athlone Power Station. It said the 22-month study included investigations, statistical and financial analyses and a public participation process.

The study found that “development of the site is financially viable, and that a mixed-use type of development will be the most suitable and financially sustainable option”, the City said.

Geoff Duffell-Canham of the city’s spatial planning department said the project is still in its early phases and construction will start in the next three years. “We’re still working on a development framework,” he added.

Athlone Power Station, a landmark next to the national N2 route, was partially decommissioned in 2003 due to high maintenance costs, among other reasons. Its two cooling towers were demolished on 22 August 2010.

The area earmarked for development is about the size of 39 rugby fields, according to the City of Cape Town.

Communities in the vicinity of the power station, Athlone, Langa and Pinelands, were consulted about the redevelopment plan. They all supported the idea, the City said, adding that residents are also in favour of retaining some of the existing buildings “to memorialise the role the site played in generating power for Cape Town”.

According to the plans, more than 22% of the site will be used for residential houses, while commercial buildings will account for 30%.

About 21.5% of the land will be set aside for government buildings. The remaining portions will be used for other public and private developments, such as a refuse site and new industries.

But the land allocation plan is not final, and “may change significantly during the further planning phases of the project”, authorities said.

Public transport part of the plan

Routes for MyCiti, Cape Town’s new rapid transit bus system, are likely to be included in the revamped site, and there’s also a potential for a rail station to be built there.

The existing electricity and waste water infrastructure will be retained, while other facilities in the area will be upgraded, said Duffell-Canham.

The Athlone Refuse Transfer Station and the Athlone Waste Water Treatment Works are the main amenities the study targeted for renovation. “Upgrading these two facilities, as well as other service infrastructure on the site, is fundamental to the success of the redevelopment of the entire Athlone Power Station site,” said a statement made by the City.

National Treasury will fund the project through its Neighbourhood Development Partnership Grant. Duffell-Canham said Treasury has invested R10-million (US$1.5-million) in the technical planning of the project. “We’ve used about R4-million ($580 000) to date.”

The City still has to finalise the budget for the entire scheme. “We’ll present a business plan to Treasury” before starting construction, Duffell-Canham added.