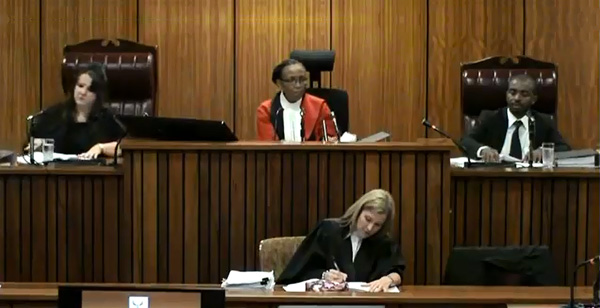 Two solemn figures sit beside Judge Thokozile Masipa as she presides over the Oscar Pistorius trial in the North Gauteng High Court, Pretoria. They are entirely silent; only their hands are animated, scribbling notes as the witnesses testify. They might maintain a placid demeanour, but they have enough power to decide the Paralympian’s fate.

For these are the trial assessors. Themba Mazibuko and Janet Henzen-du Toit were appointed by Judge Masipa before the trial began. They are there to help the judge decide whether Pistorius is guilty or not. Despite the media hype surrounding the case, not much has been said about the two assessors.

Mannie Witz, an advocate with the Bridge Group at the Johannesburg Bar, says Mazibuko is “fresh out of university” and comes from an academic background. Other than that, little is known about him.

Henzen-du Toit, on the other hand, is well known as an advocate who has defended murders and rapes, says Witz. She joined the Pretoria Bar in 1998, before leaving for the Rebel Bar in North West in 2003. She became a member of the National Forum of Advocates in 2005 and also presided over trials as an assessor during this period. In 2006, she returned to Pretoria and joined the Legal Aid Board. In 2010, she became a unit manager in the South Gauteng High Court in Johannesburg.

On Friday, 28 March, Henzen-du Toit fell ill, forcing Judge Thokozile Masipa to adjourn the trial for a week. Without Henzen-duToit, Masipa said the court would not be properly constituted. The assessor was taken to a hospital in Pretoria. Though details about her illness was not made public, The Times said her condition was not life threatening.

Witz explains that assessors are usually former magistrates and advocates, and in many cases, academics much like Mazibuko. To be chosen as an assessor, one must first put one’s name forward and join a pool of assessors. When a judge decides he or she needs an assessor for a particular court case, the person is chosen from this pool.

Assessors are a great help for judges when it comes to presiding over high profile cases, Witz adds. “Although Judge Masipa is more than capable of handling the [Pistorius] case on her own, having two assessors will help. For a judge presiding over a case like [this], it’s a lot to take in. The judge may be disturbed during the trial, she may not hear something correctly, or she may have a lapse in concentration. But the assessors can pick up what the judge has missed. They can also be consulted when she is reviewing the facts of the case.”

South Africa’s system of using assessors to help presiding officers decide on a verdict is more effective than the US’s jury system, whose decisions can be subjective, he says. Additionally, assessors are legally trained whereas juries are made up of laypeople without any experience in law. “You wouldn’t want a layperson, who is an Afrikaner, making a decision in [Pistorius’s] case.”

Henry Lerm, an attorney at the Uitenhage Justice Centre, says assessors are needed as magistrates and judges often lack the expertise and technical and scientific knowledge to match the experts who testify in cases before them.

In an article about the importance of assessors in high courts, published by the Southern African Legal Information Institute, he explains that the expert assessor’s role developed out of the judges’ inability to competently preside over complex cases. Assessors are skilled in the matters they are presiding over and can therefore help avoid a miscarriage of justice. “A second head with the requisite knowledge, experience and skill of reasoning in the relevant field will serve as a potential benefit, saving litigation costs and raising public confidence in the judicial system,” Lerm adds.

Both Mazibuko and Henzen-du Toit sit with Judge Masipa during the proceedings and listen to all the evidence presented to her. However, Witz says assessors are only there to help the judge decide the verdict. “They are only meant [to] try on the facts and can overrule the judge. But they can only overrule her on the facts. When it comes to sentencing they play no role whatsoever.”