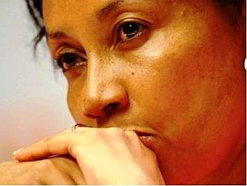 South African Minister of Defence Lindiwe
Sisulu is confident that the new pact
will enable both countries to be more
effective in fighting piracy, terrorism, cyber
warfare, climate change, and other issues.
(Image: Department of Defence)

When the SAS Drakensberg arrived in Simon’s Town on 3 December, its homecoming represented a different kind of victory for the national department of defence.

On 20 November the Durban-built vessel played the catalyst in the signing of a pact between South Africa and Argentina. The defence ministers of both countries met in Argentina, aboard the SAS Drakensberg, to sign an agreement on development and military co-operation.

According to ministry of defence spokesperson Ndivhuwo Mabaya, the two countries agreed to exchange skills, technology and military health developments as well as participate in joint training exercises and search and rescue operations.

He added that the agreement would allow both navies to tighten security in the southern Atlantic Ocean and prepare them for any security challenges they may encounter.

“We share some part of the Atlantic Ocean and we have to make it safer. There are many issues such as people stealing seafood from our seas,” said Mabaya.

Speaking at the signing, South African Minister of Defence Lindiwe Sisulu pointed out that since conflicts between countries have dissipated, national defences now face threats from independent, specialised forces.

“The most obvious of these threats are terrorism, piracy in the high seas, proliferation of nuclear weapons amongst rogue countries, biological and chemical war, cyber warfare, resource scarcity and climate change,” she said.

“Deterrence is not enough. Our armed forces must be able to anticipate and act swiftly to address these threats whenever they arise.”

Sisulu said the South African defence industries have a lot to offer Argentina.

“Our industries are technologically highly advanced and diversified, presenting the Argentine ministry of defence with a vast range of defence systems required for its modernisation programmes.”

The SAS Drakensberg was in Argentina to participate in the naval exercise ATLASUR VIII with the Argentine, Brazilian and Uruguayan navies in the southern Atlantic Ocean.

The vessel then accompanied the South African submarine Charlotte Maxeke (S102), one of the country’s three new Heroine-class attack submarines, to Simon’s Town. The other two are the SAS Manthatisi (S101) and the SAS Queen Modjadji (S103), and all are named after formidable South African women.

Before departing for South Africa, Sisulu addressed the sailors and officers on board, saying, “You fly our flag very high. Continue doing the good work to represent us as a nation.”