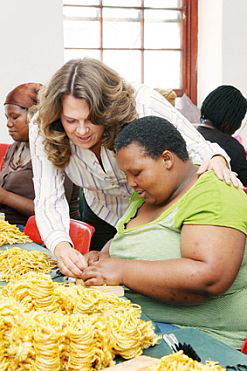 For nearly a decade now, the Amarula Trust has run a job-creation project in the Western Cape’s poverty-stricken Sir Lowry’s Pass village, giving the women involved access to much-needed income.

The scheme, called the Sir Lowry’s Pass Community Empowerment Project, is driven by 85 formerly unemployed women who knot and brush out the golden-braided tassels that adorn the neck of Amarula bottles. The project started with just four participants.

Most of the women are young mothers and grandmothers who need the money to support their families.

“Many of the women are not only working for the first time in many years, but with their relatively modest income derived from the tassels, have been able to save hundreds of rand every month for the benefit of their families and their homes,” said project chairperson Toni Rimell.

The women use the money they earn to pay their children’s school fees and, as they are often the breadwinners of their households, buy food for their families. “They also buy furniture and household equipment and even, in some instances, buy homes of their own,” Rimell added.

The participants get paid according to the number of tassels they make every month.

“This gives them the flexibility to work in their own time and so maintain their commitments to their families,” said Rimell.

The project began operating out of a garage in 2003, but has since moved to a privately owned building in the village. The facility is within walking distance from the women’s homes, so they do not have to spend any money on transport costs.

Rimell said they are currently looking for bigger premises as the project is growing at a rapid rate. “We have also now expanded to such an extent that we are seeking financial support to create a dedicated facility where the women can work and also receive training in additional life skills, including proficiency in English.”

HIV/Aids, domestic violence, crime and substance abuse are rampant in Sir Lowry’s Pass village due to high levels of unemployment and a historical lack of access to quality education and resources.

But the Amarula project is helping reverse this by exposing participants to empowering activities, such as exercise classes and training in good parenting and community counselling. They use the knowledge they acquire in these classes to help others in the community develop better coping mechanisms.

“This project has become a springboard for their intellectual, spiritual, physical and emotional development, which equips them with some of the resources to help stem community vulnerability to such problems as teenage pregnancy, substance abuse, illness and disease,” said Rimell.

The Amarula Trust’s Lorien Kee agrees: “The tassels are a small, but highly effective way of enhancing the lives of the people in Sir Lowry’s Pass village. While the trust gives extensive focus to elephant conservation, we also support enabling projects intended to help marginalised rural communities find ways to break the impact of poverty.”

Amarula, a popular creamy alcoholic drink, is made from the marula fruit that’s indigenous to Southern Africa. As South Africa’s most widely distributed liquor, it’s sold in 103 countries worldwide and is ranked among the world’s fastest-growing spirit brands, according to research by Drinks International.