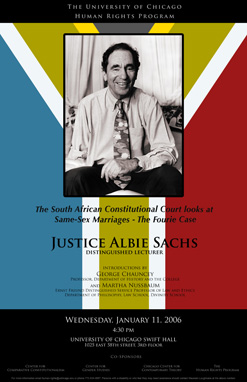 Justice Albie Sachs, who spent five decades of his life fighting for freedom and democracy in South Africa, will be honoured on 17 March by Shared Interest, a leading social investment fund based in New York.

At the company’s annual awards gala Sachs will receive recognition for his fight for social and economic justice and human rights in South Africa.

Also to be honoured for their commitment to economic democracy and development in South Africa are US leaders Debra Lee of Black Entertainment Television Networks (BET), Nadine Hack of beCause Global Consulting, and Jerry Dunfey of the Global Citizens Circle.

Born in 1935, Albert Louis Sachs began his career in 1956 as a civil rights advocate, defending those charged under South Africa’s apartheid laws. Many of his clients faced the death penalty, and Sachs himself was harassed by security forces, being banned and twice detained in solitary confinement.

In 1966 Sachs went into exile in England, where he continued to study law, and then Mozambique. He spent 11 years in each country but, as a member of the African National Congress (ANC) liberation movement, did not escape the watchful eye of the South African security forces. In 1988 Sachs was almost killed by a bomb planted in his car by South African agents. The blast took most of his right arm and the sight in one eye, but didn’t manage to stop his work.

In 1990 the ANC and other anti-apartheid organisations were unbanned in South Africa, and Sachs returned home. He served on the Constitutional Committee and the National Executive of the ANC, and played an important role in the negotiations between the apartheid government and the ANC that led to South Africa becoming a constitutional democracy.

The supreme law of South Africa

Sachs was appointed to the court by former president Nelson Mandela. He has been instrumental in a number of important decisions, most notably that on same-sex marriage. Here the court overthrew the current statutory definition of marriage as being between a man and a woman, saying that this definition was a violation of the Constitution’s general mandate of equal rights, more specifically of its mandate against discrimination based on sexual orientation.

Sachs has also been a member of the United Nations Educational, Scientific and Cultural Organisation’s International Bioethics Committee, and helped draft the International Declaration on the Human Genome and Human Rights.

In 2006 President Thabo Mbeki awarded Sachs the Order of Luthuli, bestowed on South Africans who have made a meaningful contribution to the struggle for democracy, human rights, nation-building, justice and peace, and conflict resolution.

Working to empower the entrepreneur

Shared Interest believes South Africa to be a model of economic justice, and works to help the country’s disadvantaged communities uplift themselves. It facilitates finance for people wanting to start businesses or buy homes, builds partnerships with US-based individuals and companies interested in investing in South Africa, and works with organisations to promote and recognise women as the primary drivers of development in communities.

Its core belief is that supporting income-generating activities leads to economically sustainable communities. To this end the company has since 1994 helped more than 1-million disadvantaged South Africans, 75% of them women.

Shared Interest’s South African partner, the Thembani International Guarantee Fund, provides guarantees for bank loans to community development financial institutions. In this way banks are encouraged to extend credit to these institutions, which serve those who do not have bank accounts. This gives South African entrepreneurs the opportunity to get small businesses off the ground and also contributes to the building of housing and social facilities in communities.

The US companies to be honoured have also played a role in South Africa’s democratic development. BET, a cable network targeting young African Americans, as far back as 1994 organised a Mandela Freedom Fund Telethon to support South Africa’s change to a democratic government. The company has remained active in the country, taking on work such as coordinating and marketing the first Durban Jazz Festival in 2001. BET content is also licensed to satellite television provider DStv in South Africa.

BeCause Global Consulting specialises in cause-related marketing and corporate citizenship. The company helped Sachs raise funds to buy and commission the art collection of Constitution Hill, the home of the Constitutional Court. Here beCause worked with Artists for a New South Africa in Los Angeles and South Africa Partners, which promotes partnerships between the US and South Africa.

Sachs was a friend of the late exiled South African artist Gerard Sekoto, and many of the artist’s drawings are held in the court’s collection.

Also to receive an award is Jerry Dunfey of the Global Citizens’ Circle, which attempts to resolve conflict situations by bringing together groups of concerned individuals – students, businessmen, clerics, educators and activists – in programmes and discussions. The organisation has worked in South Africa, Northern Ireland, Cuba and Israel, as well as in Boston, New York, Washington, DC, and Atlanta.

In October 2007 Shared Interest honoured Tutu during a gala dinner with the theme of “From one touch – a million ripples”. A well-loved figure both in South Africa and abroad, Tutu has been an inspirational – and often outspoken – campaigner for better values in society. He was awarded the Nobel Peace Prize in 1984 for his fight against racial injustice in his homeland, and chaired the Truth and Reconciliation Committee in the mid-1990s. He is also honorary chair of Shared Interest’s board of directors.