Most African professionals living abroad would love to return home, and almost all retain strong links of family and friendship to their countries. These were some of the insights from a new survey by Homecoming Revolution, presented by CEO Angel Jones at the brain gain company’s Speed Meet Jozi event in Sandton on Friday 14 August.

The Homecoming Revolution Insights Report 2015 comes out of three surveys, of Africans abroad and returned expatriates, conducted from February to May this year. It examines the key reasons Africans move abroad, what they miss most when they are there, what links them to home and the triggers that encourage them to return.

Most of those surveyed – 68% – have a degree, and 66% work in a senior or executive position. Their fields are demanding: financial services, information technology, engineering, advisory services, marketing and medicine.

“We really are looking at the brain drain in a serious light,” Jones said, “and it’s time that this became a brain gain.”

Jones was speaking at the Johannesburg leg of the Homecoming Revolution’s Speed Meet networking sessions, regular gatherings of pan-Africans held in major global cities such as New York, London, Nairobi and Lagos.

Since 2003 Homecoming Revolution has worked to bring talented South Africans back home, reversing the brain drain. In the last two years its efforts have expanded to include other sub-Saharan African countries, particularly Nigeria, Kenya, Uganda and Ghana.

Jones said that in the past five years some 359 000 expat South African professionals have returned home. This has a major ripple effect on joblessness and the economy: a study Solidarity suggests that for every one skilled expatriate who returns, nine new jobs are created in the formal and informal sectors.

Of the professionals surveyed for the study, 79% were from South Africa and 21% from Nigeria, Kenya and other sub-Saharan African countries. Forty-four percent were living in the United Kingdom, 13% in the US and 12% in Australia and New Zealand. 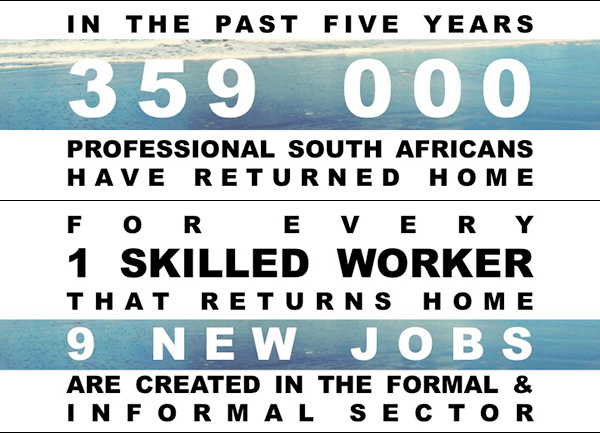 Despite potentially flourishing careers abroad, many of these professionals still saw opportunities back in Africa.

“There’s a wonderful quote I heard from a homecomer recently,” Jones said. “He said, ‘I didn’t come back in spite of the problems. I came back because of the problems. Because I saw there was a problem with our electricity, I wanted to come home and create a new solar power enterprise.’

The stories of returning African professionals help spread the message. “What we do as Homecoming Revolution is inspire people to return home by showcasing stories of other people who have come back, and who are making a really significant difference.”

Jones then turned to why Africans go abroad in the first place.

“Why do people leave? This is exciting to know, because the emphasis is often only on the bad stuff,” she said. “The number one reason people go away is for career reasons. And I think that’s a good thing. Travel is number two.” 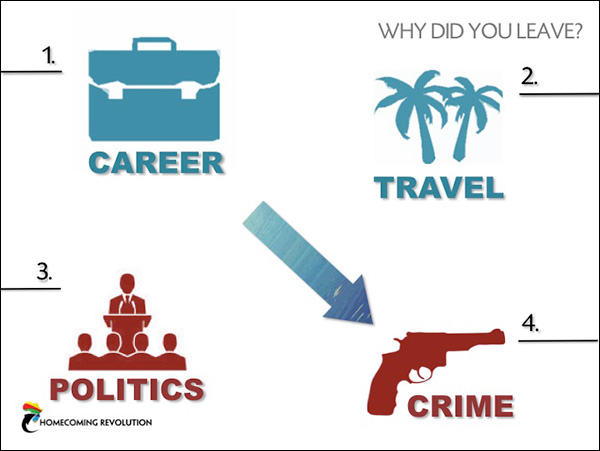 The third reason respondents gave for leaving was the political and economic situation in their countries, and the fourth crime and safety concerns – down one place from a previous Homecoming Revolution study.

“This was a significant difference,” Jones said. “Crime has gone down, it seems, and political instability more of a hindrance.”

The study then turned to the all-important question of whether migrants wanted to come back to Africa. A quarter – 26% – said no, 21% said they didn’t know, and a “whopping” 53% said yes, they wished to return home. “This was exciting,” Jones said, to applause. 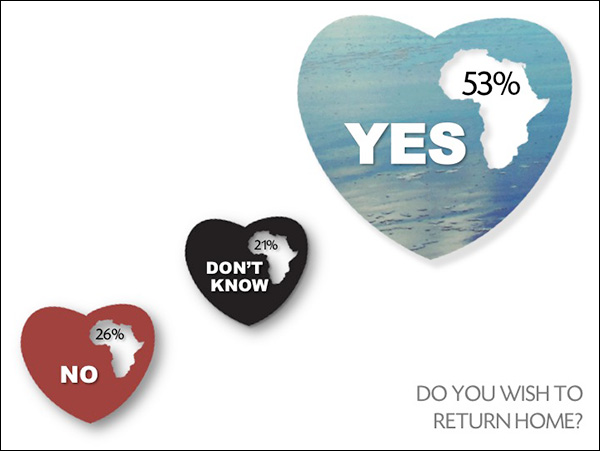 “And what would people say to someone thinking of returning? We’ve grouped the responses together. Things like, ‘Follow your heart. Go for it. Wish I were you.’

“Seventy-one percent of Africans living abroad think the idea of returning is a very good thing. And this is something we are encouraging, on a worldwide scale. We started Homecoming Revolution to encourage South Africans to return to South Africa. For the past two-and-a-half years we have been working with Nigerians, Kenyans, Ghanaians and Ugandans abroad, encouraging them to come back.” 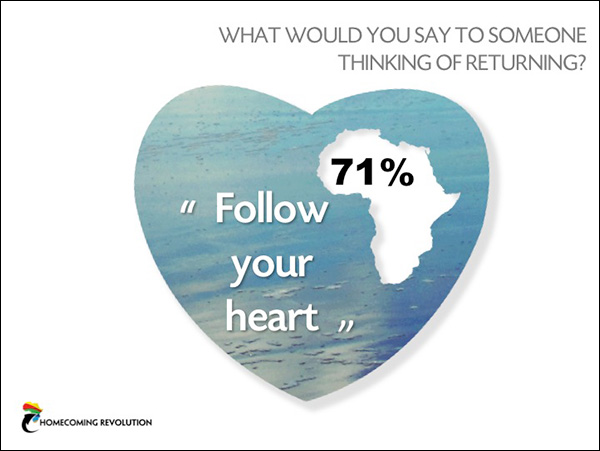 The Homecoming Revolution research revealed that the strongest pull of home was emotional, “all about following you heart”. Africans mainly want to return to be close again to friends and family, a reason cited by 61% of respondents.

“There really is nothing to beat the grass under your toes, having grannies and grandpas close by, having your kids know that these are their roots,” Jones said.

“We see trigger points, when people get to their late twenties and early thirties. They want to get married, or just got married, or had their first or second child, and want to be home where they feel their children will understand their roots.”

Lifestyle is the second reason to return, at 35%. “Our wonderful weather. The standard of living is really good here.”

The third reason, cited by 31% of respondents, is a sense of belonging. “You can’t get that, no matter where you go abroad,” Jones said. “We have lots of stories of people saying, I was living abroad, but in a gilded box. I never really felt like I belonged.”

The African diaspora still have strong personal links to home. Ninety-two percent of respondents said family and friends were their strongest link back to Africa. For 70%, visiting home kept them connected.

Financial ties were also important, with 25% saying they still had money invested in their home countries, 12% remitting money and property back home, and 11% citing business connections as an important link.

The main thing expats want to stay informed on is the employment market back home. “People are very keen to understand what job opportunities there are back home – 79% of them,” Jones said. “A lot of what we do is working with pan-African employers to showcase these job opportunities for people abroad.”

Forty-two percent of those still abroad want to know about entrepreneurial opportunities. “We encourage people abroad to find best-practice models that work, particularly for the African story, so they can do something to create jobs back home,” Jones said.

“It’s very exciting to see that 42% – this has been a sharp increase – 42% of people want to know how they can make a difference back home. In the survey we conducted a year and a half ago, this figure was sitting at around 20%. So we are seeing a lot of increased active citizenship from Africans around the world.”

Jones concluded: “There is the brain drain. It does exist. But we are working hard to reverse it into a brain gain.”