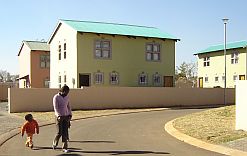 Government has vowed to curb the proliferation of informal settlements in South Africa’s cities, with more social housing projects set to roll out in 2010.

President Jacob Zuma launched the latest such project, the Emerald Sky human settlements project, in East London in the Eastern Cape on 19 June. It is described as an “innovative housing project” with 656 duplex-styled units, 350 of which are already occupied.

Emerald Sky is part of government’s social housing programme and aims to provide decent rental houses for low and middle income earners. These are generally South Africans whose salaries are too high to get direct government subsidies, but earn too little to qualify for a bank mortgage.

Government is providing grant funding to private companies to build the rental homes in a bid to curb the growth of slums.

The primary aim is to ensure that low and middle income workers, looking for affordable rent, are able to live in decent houses nearer to their workplaces. It is also about keeping them closer to facilities such as hospitals, schools and shopping centres.

Emerald Sky is close to East London’s industrial areas of Wilsonia and Braelyn, and sits within a 5km radius of Frere Hospital and educational facilities.

“You will notice that the new style social housing projects that we are building are on well-located and landscaped land,” Zuma said. “They ensure proximity to economic opportunities, transport and urban centres.

“The settlements also contribute to our social transformation programme of reversing apartheid spatial planning and to restore the human dignity and self-esteem of our people.”

Government is currently involved in more than 8 000 housing projects across the country, according to Zuma. It’s also upgrading most of the 2 700 informal settlements that “exist alongside almost every urban and peri-urban town, to address the squalid conditions of those living there”.

The government-run Guarantee Fund makes it easier for working-class people to access a mortgage bond to build their own homes. It aims to eliminate stumbling blocks that face some South Africans when applying for funding at banks and other financial institutions.

The Department of Human Settlements, headed by former businessman Tokyo Sexwale, was allocated R15-billion (US$2-billion) to spend on housing this year.

Government has been behind numerous social housing projects in different communities. Since 1994 it has built over 2.7-million homes, both rental and fully subsidised. “In doing so, more than 13-million people have been provided with adequate shelter,” Zuma said.

Some of the free housing projects, known as Reconstruction and Development Programmes (RDPs), have been marred by shoddy workmanship, while others have not met inhabitable standards or have been left unfinished. Sexwale lashed out at companies involved in such projects and announced that his department will spend R300-million ($40-million) to repair poorly-built RDP houses.