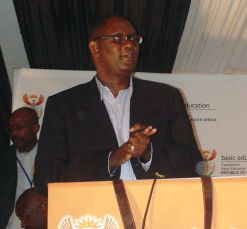 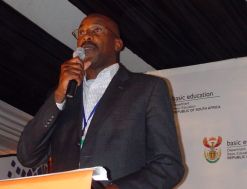 More than four hundred community members braved the rainy weather to gather at the Caley Sports Ground in Butterworth in the Eastern Cape for the national launch of the Accord on Basic Education and Partnerships with Schools campaign on Sunday, 2 October.

The campaign, which is run by the Department of Basic Education, the National Economic Development and Labour Council, and Brand South Africa, encourages businesses to adopt a school and donate educational facilities to them.

Brand South Africa’s director of stakeholder relations, Iggy Sathakge, said the launch came ahead of a national roll-out of the Adopt-a-School campaign, with the aim of delivering quality education to all underdeveloped schools.

“The premise of the campaign is to build requisite skills at primary level education,” said Sathakge, after acknowledging that the nation’s skills level is low and is at risk of staying that way.

On 13 July, an accord was signed by businesses, labour officials and the government as a pledge to ensure every child is in a classroom and every teacher is teaching.

A number of companies have already committed themselves to the campaign including banking group Absa, the Industrial Development Corporation and food manufacturer Nestlé, which is providing bursaries to pupils.

Sathakge said the majority of citizens lack a strong educational foundation, which is supposed to have been acquired at primary school level. As a result, when they get to university, they tend to drop out.

He added that it is not just up to teachers to ensure children are educated but that all members of communities, including churches, families and police, should be accountable as well.

The launch took place in Butterworth as the town was recognised as a hotspot for dysfunctional schools.

Sathakge said the campaign’s initial roll-out will take place in the Eastern Cape, Limpopo and Mpumalanga.

“The challenge is greater in these three provinces and special attention will be given to schools in these areas,” he said, noting that the matric pass rate has been dropping in recent years in these regions.

He added that there will be no specific timeline for the campaign and that it will operate for as long as necessary to reach the objective of providing quality education.

As a means to monitor progress, Sathakge said that partners will report regularly on the roles each business has played.

He added that a website will launch within the next month that will monitor the role businesses are playing in their chosen schools.

Key points of the accord

According to the recently signed accord, organised labour, business and community organisations must aim to adopt between 100 and 200 schools by the end of 2011. Depending on this year’s success, the programme will be expanded to target between 500 and 1 000 schools in 2012.

The accord further states that businesses must adopt schools that are performing poorly and subsequently implement whole school development programmes.

“If a business adopts a school, they may conduct an analysis of what a school requires and then provide what is needed,” said Sathakge.

The accord also states that the parties involved in the Adopt-a-School campaign will agree to work together to change the mindset of teachers, pupils and parents to rebuild the part of the education system that is dysfunctional.

It concludes by saying that the campaign aims to produce fully functional schools with the so-called Triple T foundations of a good institute. These include effective leadership and management; teachers arriving in class on time and teaching for the full period; and making teaching materials available.

Congress of South African Trade Unions secretary-general Zwelinzima Vavi roused the crowd with a passionate speech on the ills of the current education system.

“This campaign will demand accountability. Those who have mismanaged the education system must be dismissed,” he said to a cheering crowd.

He said that communities must adopt a zero tolerance approach towards lazy teachers and those who use female pupils as sexual objects.

Vavi emphasised the lack of progress made in provinces like the Eastern Cape and said the crisis manifests profoundly in this province because the Department of Education is dysfunctional.

He also said that, countrywide, most children from poor backgrounds are stuck in dysfunctional schools, adding that: “60% of those schools do not have laboratories and 60% of pupils are pushed out of the education system before they reach grade 12.”