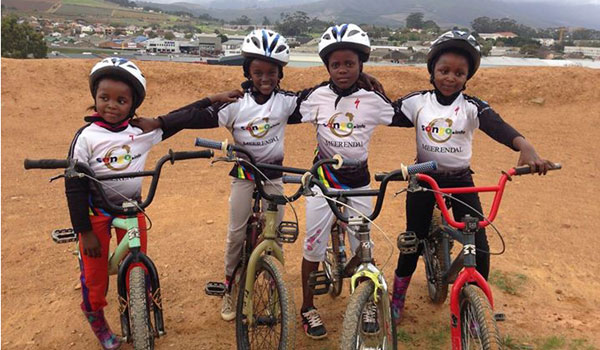 Songo.info is a sports and social development initiative that strives to improve children’s lives through participating in sport, providing a safe and fun place to play away from the township streets. (Image: Songo.info)

“We strive to improve the lives of children living in townships by providing them with a safe place to play, grow and develop,” says Songa Fipaza, the founder of  Songo.info.

The organisation has grown from humble beginnings, starting with Fipaza’s dream to uplift Kayamandi. He has lived in the settlement, in Stellenbosch, Western Cape for many years, and has been working hard to bring about change.

The festive, vibrant community of Kayamandi, which means “sweet home” in isiXhosa, has a population of 33 000 people, whose homes range from formal houses to shacks. About 70% of them live in informal settlements without access to water and toilets. Unemployment is high and total income per family is low.

“As a result, social issues run rampant, from malnutrition and hygiene, to the challenges around keeping children safe from the perils of poverty and unemployment, including alcohol and drug abuse,” Fipaza says.

Education is another fundamental issue. There is a distinct lack of English-speaking schools in the area, and the existing schools are heavily oversubscribed. They also lack facilities and good quality education. Many children struggle to pass and get their matric. This further exacerbates the social issues of unemployment and hopelessness.

The history of Kayamandi has not always been sweet. Established nearly 100 years ago, it has suffered from significant prejudice from surrounding communities. In its founding days, the township, which is opposite Stellenbosch Wineries, was called “Kafferland” and was under tremendous pressure from local farmers who wanted the community moved.

In 1941, Kayamandi was officially recognised as a “location”; this meant black people in the region were relocated to the township. Formal services evolved slowly. When in 1986 the Influx Control Act – which restricted the movement of black people into white areas – was abolished, Kayamandi grew rapidly, far too quickly for the resources available. Today, the 33 000 residents live in 75 hectares, and services are still slow to come.

There are plenty of negative social issues, but Fipaza has recognised the value of creating a centre for children and a safe place for them to grow and develop. He dreams of providing “his children” with the possibility to go out and achieve their dreams, no matter how big or small, providing opportunities that have not been available in the area.

His goals are significant: to look after and protect the children, and to provide them with opportunities as all children should have, with the belief that anything is possible.

The goals of Songo.info include: