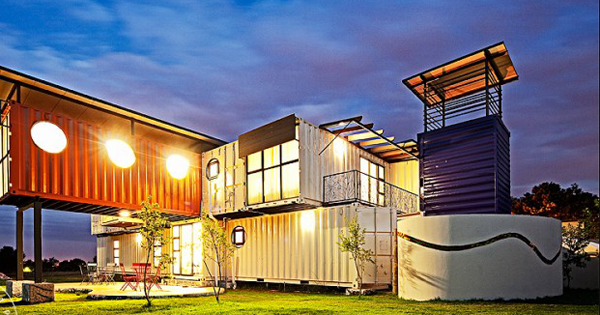 Repurposed shipping containers and green building methods have provided the space to set up a caring and nurturing environment for 80 orphaned and abandoned children. There is also opportunity for dignity through the home’s environmental concerns. (Image: Dennis Guichard)

Two sisters have created an orphanage that has changed the lives of children in ways that they could never have imagined. Because of their efforts, these youngsters, who otherwise would have fallen through the cracks, are housed in a caring, nurturing environment that ensures their positive growth and development. And it all takes place in repurposed shipping containers.

A progressive architectural structure that is acting as a regenerative space, the facility has made a name for itself, particularly as it is made out of shipping containers. Containers were chosen as the main building material for the orphanage as they were 25% cheaper than using traditional brick and mortar.

A shipping container for a home

New Jerusalem Children’s Home is located on a 26 000m2 agricultural smallholding in Midrand halfway between Johannesburg and Pretoria. It aims “to become one of the best children’s homes in Africa in the provision of holistic and integrated quality care to orphaned, abandoned, abused, traumatised, and vulnerable and HIV-positive children”.

The orphanage was founded in 2000 by Anna Mojapelo, an advocate, businesswoman and community developer, and her sister Phina Mojapelo, a social worker with vast experience in working with children, youth and HIV/Aids. The sisters are actively involved in the home.

Anna donated the property, which has been transferred into a trust for the benefit of the children. Facilities comprise nurseries for the babies, dormitories for the older children, communal kitchen and dining facilities, a crèche, a Montessori pre-school, play and sports facilities, and a substantial permaculture vegetable garden.

Each unit is a vibrant, inspiring space, according to Anna. There is enough space for 12 children and a house mother, and two houses share a communal kitchen, dining and lounge area. “These are the homes of these children and they not only make the orphans feel loved and special, but also help to stimulate their stunted development.”

Constructed out of 28 repurposed shipping containers and recycled materials, the houses use solar power for lighting and hot water, and grey water is recycled for irrigation. With the exception of drinking water, the house is off the water grid. 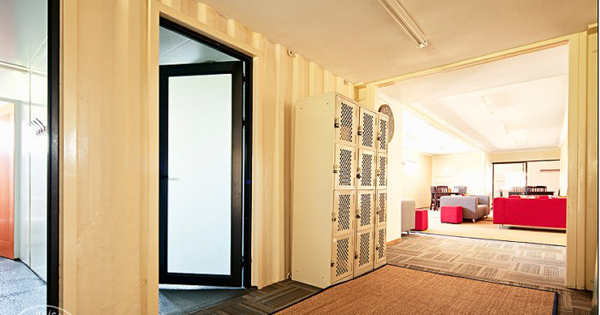 Constructed out of 28 repurposed shipping containers and recycled materials, the houses use solar power for lighting and hot water, and grey water is recycled for irrigation. With the exception of drinking water, the house is off the water grid. (Image: Dennis Guichard)

New Jerusalem commissioned 4D and A Architecture to expand the space and develop new housing and facilities. The container complex is environmentally friendly. Architect Sean Wall and his team solved problems of waterproofing and insulation, and installed a functional sanitation system.

4D and A’s Mia Anfield wrote in Gizmag that there were already two shipping containers on the site being used for storage, prompting the idea to use more of them for the home. Gizmag is an online journal that covers the full spectrum of new and emerging technologies. “The company had already been interested in the work of Adam Kalkin, an American architect and prefabrication specialist who was among the first to put shipping containers to use as houses. The designers, it seems, simply put two and two together.”

Completed in December 2011, construction took just six months, though Anfield pointed out that there were delays caused by the arrival of materials on site, many of which were donated. The project used containers arranged vertically and horizontally.

Focusing on the thermal performance of shipping containers, particularly during cold weather or on hot, sunny days, Anfield said design measures included “orientation of the building, timber screens constructed of eco-friendly composite decking, use of a roof garden for thermal mass and the inside walls and ceilings of the containers were clad in dry wall plus 50mm Isotherm foam insulation”. The containers were raised on plinths to encourage the flow of air. The old brick and mortar sleeping accommodation was converted into a new kitchen and dining room. The orphanage has also been fitting with solar thermal and photovoltaic systems.

The children who live here are mostly discarded at birth, and there was some resistance to the choice of shipping containers. Anna and Phina were uncomfortable about putting abused and orphaned children in containers. However, the new structure has inspired the children into participating in keeping their home clean and recycling, even going so far as to call it a “five-star hotel”.

There is a colourful, lively aesthetic at New Jerusalem. Adrienne Feldner, of the organisational sponsor Orange Babies, said: “I think it’s awful for the children to always be the recipients, to always be on the receiving end of charity and never to be in a position to give.” Their involvement in the environmental concerns of the home had “given them a sense of dignity”.

All developments at New Jerusalem are centred on the education of the children and the protection of their environment. Its mission is located within an environmental sustainability framework and the home has committed to use any means possible to reuse and recycle and to minimise its carbon footprint.

New Jerusalem Children’s Home provides residential care to 80 orphaned and vulnerable children, many of whom are infected with or affected by HIV/Aids. For many of the children, this is their first real home and family they have ever had. Moving into the house has given the children a new-found sense of community, pride and dignity.

“Saving children is a passion. It’s wonderful to see how children grow when you know how they were brought in,” says Anna.