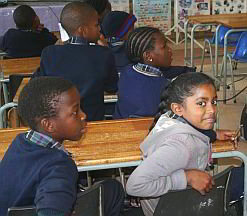 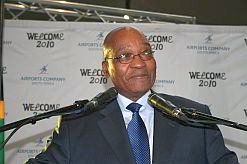 South Africa is well on track towards achieving the 2015 Millennium Development Goal for education, according to President Jacob Zuma.

“Today we are able to say that we are on track to reach or exceed the Millennium Development Goal target for education before the 2015 deadline,” a confident Zuma said in Parliament on 17 February 2011.

He was responding to parliamentarians’ questions following the State of the Nation Address that he delivered on 10 February.

The Millennium Development Goal for education is to ensure that, by 2015, the majority of children all over the world are able to access and complete a full course of primary schooling.

Sub-Saharan Africa experienced an improvement in the number of children enrolled in schools between 1999 and 2008, according to the UN. Enrolments in primary education institutions increased from 58% to 76%.

The South African government has to build more schools before 2015 to achieve the goal. Zuma promised that 100 mud schools will get proper infrastructure during 2011, while another 246 schools are earmarked for supply of appropriate facilities within the year. “This has been budgeted for,” Zuma said.

About 3 600 schools will have their infrastructure improved by 2014, Zuma said. “Nationally, we plan to improve the schools to bring them to basic safety and functionality levels …”

About R8.2-billion (US$1.2-billion) has been allocated by the government to eradicate South African mud schools between 2011 and 2014.

Enrolment of girls in schools and universities in South Africa has grown drastically over the years. “It is impressive that the proportion of girls attending primary, secondary and tertiary education has improved significantly. This is important because education is central to development,” Zuma said.

The government is hoping to increase enrolment rates in secondary schools to 95% by 2014.

Zuma also wants teachers to be in class, teaching for no less than seven hours a day. This forms part of the plan to improve literacy and numeracy among pupils in government schools.

The president emphasised that pupils must also be in class “on time, ready to learn and cooperate with their teachers”.

The National Education Evaluation Unit is one of the mechanisms that will be established to improve education. The body’s role will be to ensure that the schooling system is effectively monitored and evaluated.

Zuma said the unit will help prevent situations like that in the Eastern Cape, where the provincial Department of Education has run out funds to provide adequate necessities for schools.

About 4 000 teachers have been laid off in the province as there is not enough money to pay them. “We are concerned that the contracts of over 4 000 temporary teachers have been terminated, resulting in many schools facing shortages of teachers,” Zuma said.

“The learner and teacher support materials have not been adequately delivered. This has led to a situation where there are learners without textbooks.”

The Eastern Cape situation will be remedied soon, Zuma vowed. Significant funds are also needed in the province to revive the school nutrition programme and provide transport for pupils.