Sporting an emblem of a boy spreading his wings, South Africa’s first gay biker club, Unapologetic, is exercising its freedom to be who they are. The group’s founder, James William Brown, credits the Constitution for this.

The Unapologetic Bikers Club is here to dispel the myth that biking is the bastion of gung-ho heterosexual masculinity.

Based in north-west Johannesburg, this gay biker group offers a place of belonging to fellow gay bikers.

James William Brown, its founder, said: “Well, I started the group to prove people wrong. To show that we’re still ‘normal’ people, even though we’re gay.

“The main point is to reach out to the community and help people who struggle and to show we care. Ultimately, I want to help prove wrong all the stereotypes that people have about being gay.”

How the Constitution helped

To Brown’s knowledge, Unapologetic is the only gay biker club around.

“If it were not written down in our Constitution, many would still live in fear of reprisals for having a different sexual orientation [compared to] others.”

According to Brown, the group is vital because bikers who are gay, don’t feel as if they are alone.

“It should give them a feeling that they’re part of something and they’re making a difference. It’s also a way to meet new people and help others come out; showing them that they don’t need to conform to what society says they are. 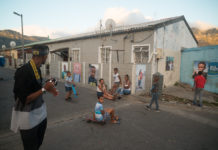