The Constitution is the cornerstone of respecting the rights of all people living in the country. ‘The most admirable Constitution in the history of the world’, as said by Harvard Law School scholar Cass Sunstein is celebrating twenty-five years of its existence.

In commemorating this momentous achievement, the South African Mint (SA Mint) a subsidiary of the South African Reserve Bank (SARB) launched a ‘SA25 – Celebrating South Africa’s’ coin series campaign, and finally, the wait is over! There is a new R2 circulation coin you will soon be seeing which makes up the final edition of the democracy campaign.

This coin’s design is the result of a design competition held in 2019, and it depicts the section 12 Right to “Freedom and Security of the Person” in the Bill of Rights. The ‘reverse’ side depicts a mother and child walking freely in nature, symbolizing the right to freedom and security #SAMint #SA25 #Coins

“It is our most democratic coin thematically. The design ideas come from those born in a free South Africa in response to what freedom meant to them. We worked with many young and talented artists to bring to life their vivid imagery of constitutional democracy”; said Tumi Tsehlo, Managing Director of the SA Mint. 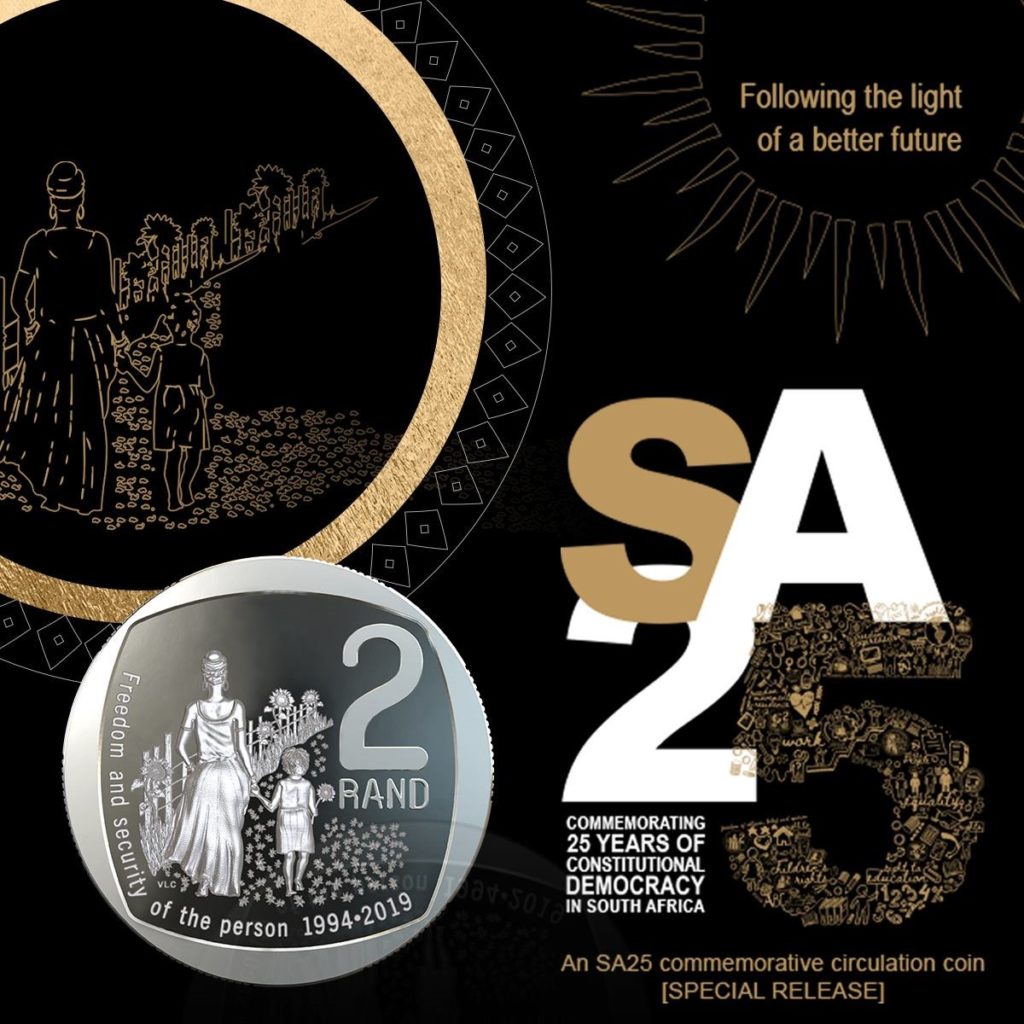 “The new collectable coins demonstrate our roots, and we are confident that they will serve to encourage all South Africans to work towards contributing to brighter chapters in our country’s history book,” said Tsehlo.

SA Mint’s commemoration of the constitution brings into line Brand South Africa’s #Inspiredbymyconstitution a Constitutional awareness campaign aimed at educating and ensuring that the values enshrined in the widely admired constitution, are indeed a lived experience by all parts of society. “These collectable coins will serve as a tangible and visible reminder to all South Africans of our hard-fought freedom and our constitutional legacy.”

Some facts about SA’s coins

The Black Wildebeest or Gnu, is portrayed on the reverse of the R5 coin. Although South Africa’s first decimal coin series was released in 1961, no R5 coins were minted until 1994. In that year, two R5 coins were issued: the reverse of the first commemorated the Presidential Inauguration and that of the second depicted the Gnu (Black Wildebeest). Since 1996, South Africa’s 11 official languages have been acknowledged annually, in rotation, through the representation of the word.

As part of the third decimal series, it was agreed that the Kudu be portrayed on South Africa’s first R2 circulation coin. Initially, a leopard design was considered for the R2 but it was decided that designs for the R1, R2 and R5 should be the antelope. The Kudu is known as the “King of the Antelope” because of its magnificent horns.

The first Springbok appeared as long ago as 1947 as a truly South African symbol on our silver crown size coins. The original design is still viewed as one of the best designs in the world. Based on the original artwork of one of South Africa’s famous sculptors, Coert Steynberg, the Springbok was used on various other South African coins. The words “SOLI DEO GLORIA” (“To God alone the Glory”) appear on the R1 coins.