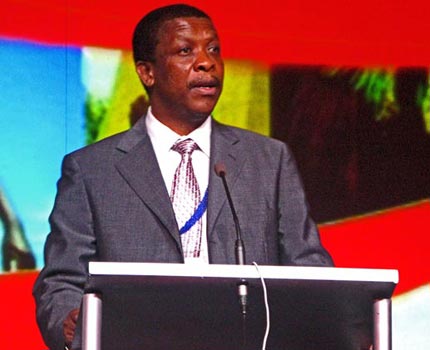 Johannesburg, South Africa: The conference, now in its third year, aims to make it possible for African communicators to exchange ideas and practical suggestions on how to project a positive image and reputation of our continent to the world, using the opportunities presented by the FIFA Football World Cup in 2010, said Nkwenkwe Nkomo, Co-Chairperson of the National Communication Partnership. It is themed ‘Africa’s time has come, Mobilising for 2010 and beyond.’

“We wanted to achieve a coherent and action-oriented plan. The conference was also a way to build African solidarity and to foster a climate that contributes to African growth and development,” explained Nkomo.

The keynote address, delivered by South Africa’s Minister in The Presidency, Dr Essop Pahad re-iterated the significance of the much awaited event for the African Continent.

“In our communication of the 2010 world cup, we need to give real meaning to what we said when we told the world that this is going to be an African World Cup.

As the government of the Republic of South Africa, we feel very encouraged that our brothers and sisters from other parts of the African continent have heeded the call and made an effort to be with us over the next two days. This partnership means a lot to us as the host nation,” said Minister Pahad.

Mr Moeketsi Mosola, the acting Chief Executive Officer of The International Marketing Council, custodian of Brand South Africa, noted the strong representation at this year’s conference from other countries. What will happen at Soccer City or the Moses Mabidha Stadium in Durban in June and July of 2010 will thus also influence global perceptions about Botswana, Uganda, Cameroon and about Tunisia.

“These two days will provide us with opportunities to shape the positive messages, about our continent and its people that we would want to leave a lasting impressions for those who will attend the event,” said Mosola in his opening remarks.

Other key speakers included Peter Mutie, Chairman of the Public Relations Society of Kenya, Dr Irvin Khoza, the Chairman for 2010 Local Organising Committee, Mr Trevor Ncube, CEO of Mail & Guardian, Mr Themba Maseko, CEO,Government Communications & Information System and many more who all touched on pertinent issues around communication in the context of 2010. Delegates represented were from Botswana, Kenya, Liberia, Nigeria,Sudan, Swaziland and Tanzania. For more Information.