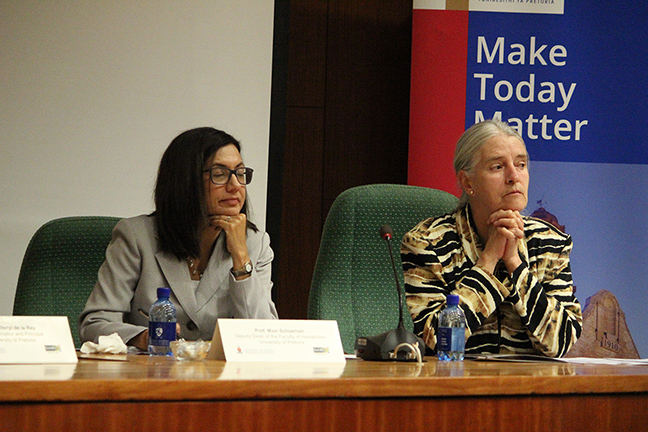 On Wednesday 5 October Brand South Africa and the University of Pretoria hosted the inaugural University Dialogue on the Nation Brand. The one-day dialogue was attended by leading academics and

On Wednesday 5 October Brand South Africa and the University of Pretoria hosted the inaugural University Dialogue on the Nation Brand. The one-day dialogue was attended by leading academics and representatives of government, civil society and business.

Brand South Africa CEO Dr Kingsley Makhubela articulated the importance of academics contributing to the discussion on the state of the Nation Brand. Participating academics shared their well-researched papers on various subjects which impact on the Nation Brand.

The South African brand is the mental perception that people have of the country and its attributes. For the 65% of South Africans living in towns and cities, these perceptions are filtered by their urban experience. Cities are pivots of formal and informal economic activity, private and public sector jobs. They concentrate economic opportunity and access to social benefits such as education and health services. For many people living in cities, urban affiliation is stronger and more meaningful than an increasingly abstract and distant national affiliation. Cities hold many benefits but in the rapid transformation that characterises South Africa’s cities there are also significant challenges. Urbanisation is swift and largely uncontrolled, with growing slums and informal settlements, unequal access to urban services, significant climate impact and rising inequality. South Africa’s cities play an increasingly important role in the destiny of the country and this paper considers the significance of city brands in the overall perception of South Africa. It assesses their competitive positions within South Africa, in Africa and across the globe, and it does so with a measure that is relevant to a wide spectrum of stakeholders of the South African brand – national and international business, institutions, government and its citizens.

This paper uses data collected across the four waves of the National Income Dynamics Study (NIDS) to construct a measure of social cohesion for South Africa. We compare our index to one derived using the Afrobarometer data and find a large degree of consistency in trends in the index and its constituent components over time across the two datasets. However, there is less consistency in the measures once one moves to lower levels of geographic disaggregation. We also find far less variability in the constructed index relying on NIDS panel data as opposed to the repeated cross-sections from Afrobarometer. Having derived the index, we then correlate it with a variety of indicators of social and economic well-being. We show that higher levels of education, per capita income and employment are positively associated with higher social cohesion whilst social cohesion is negatively associated with poverty, service delivery protest and perceptions of crime. In addition, municipal policy and competence are closely associated with higher social cohesion. Whilst this work is exploratory, it is encouraging, and suggests new opportunities for future research to begin to take seriously the link between social cohesion and economic and social development.

The branded national imagination and its limits: Insights from the post-socialist experience

Nation branding has gained significant attention in business, policy, and academic circles since the late 1990s. Faced with the pressures of globalization, countries around the world have invested in various branding programs in the hopes of gaining a competitive advantage within a global marketplace. At the same time, nation branding has been touted as a tool for nation-building efforts that aim to generate national unity and pride. My focus in this presentation is on this latter claim and its political and cultural implications. I trace the limits of branding as a tool for re-constructing nations as “imagined communities” (Anderson 1983). I analyze the discourses and practices of nation branding from a critical cultural perspective, rooted in the theoretical traditions of political economy and cultural studies. I draw on examples from post-socialist Eastern Europe, which underwent dramatic economic, political, and cultural transformations after the unraveling of the Soviet bloc in 1989. In my discussion, I consider the impact of nation branding on national identity and democratic governance in that region. Ultimately, I argue that, in the post-socialist context, nation branding served to depoliticize efforts at collective self-redefinition by subordinating national identity to market-oriented and outward-facing concerns. This has led, in many cases, to a nationalist backlash, which challenges the principles of European integration and globalization. I propose that, while we must retain a keen awareness of local histories and legacies, we can find instructive insights in the post-socialist experience that can inform our understanding of the limitations of the branded national imagination in other post-conflict and post-colonial contexts.

Exploring the role of business in nation branding: Observations from South Africa

Since the formal use of the term by independent policy advisor Simon Anholt in 1996, nation branding has attracted the attention of scholars across a range of disciplines including marketing, management, tourism studies, international and public relations, media and cultural studies. Despite the growing body of multi-disciplinary scholarship on the construct, the contribution of business to building (and sometimes destroying) nation brand equity appears to have received little consideration in the academic literature. The purpose of this article is to explore the role of business in nation branding. We adopt a constructivist perspective to nation branding and use stakeholder theory to argue that business has an important role to play in influencing both internal and external perceptions of nation brands. Following an overview of literature on nation branding, we introduce literature from the fields of marketing and management to position the role of business in nation branding. We show that business influences nation brands in a number of direct and indirect ways. We specifically consider the direct contributions that business can make to nation branding. These include the marketing of brands with country of origin effects, internal branding that directly supports nation building and the nation brand and, developing active partnerships both within business and between business and government to promote positive perceptions of the nation brand. We use secondary data sources to provide examples situated in the South African context that illustrate examples of businesses that have both contributed to and detracted from the South African nation brand. We summarise these into a descriptive framework that illustrates ways in which business shapes nation brands. We conclude with suggestions for both practice as well as future research.