BRICS is an acronym for the grouping of the world’s leading emerging economies, namely Brazil, Russia, India, China and South Africa.

The BRICS Leaders’ Summit is convened annually with discussions representing spheres of political and socio-economic coordination, in which member countries have identified several business opportunities, economic complementarities and areas of cooperation.

South Africa assumed the rotational Chairship of BRICS from 1 January to 31 December 2018. The 2018 Summit will be a seminal milestone for BRICS cooperation, as it represents a decade of BRICS cooperation at the highest diplomatic level.

In line with this mandate, Brand South Africa has collaborated with The Department of International Relations and Cooperation (DIRCO) on the BRICS 2018 Summit, taking place in Johannesburg, South Africa, 25-27 July 2018.

South Africa’s hosting of the tenth BRICS Summit in 2018 is a significant moment. It presents an opportunity to reflect on the evolution of the BRICS in the past decade. 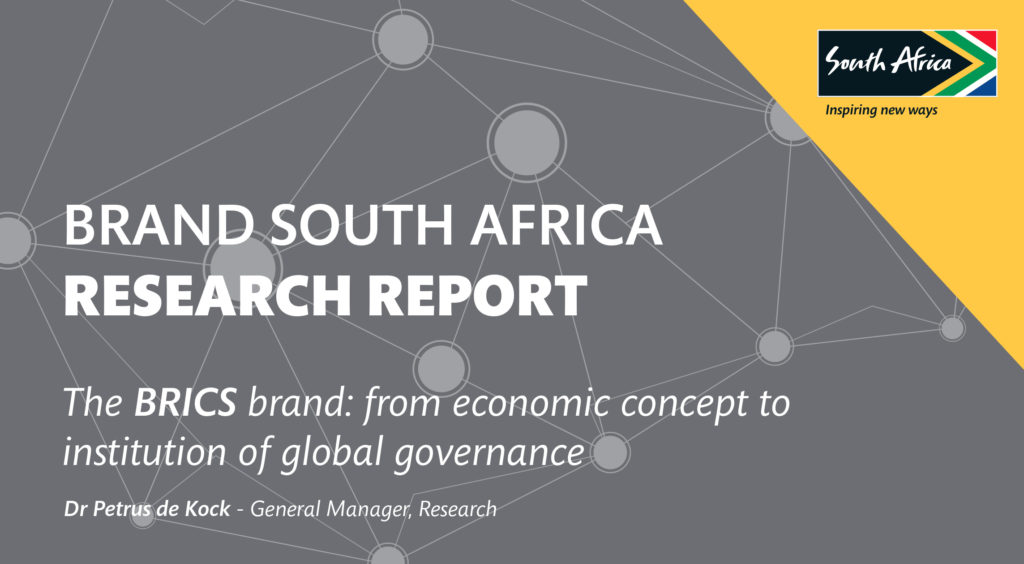 In a research report published during 2015, Brand South Africa began exploring the development of the BRICS and its institutionalisation. It asked rather speculatively whether the BRICS can be approached or analysed as an emerging institution of global governance, and hence, a brand in and of itself.

With South Africa hosting the tenth BRICS Summit in 2018, Brand South Africa set out to update the 2015 research with relevant new information that appeared subsequently.
The extensive 2018 report, compiled by Brand SA’s research team under the leadership of the General Manager: Research, Dr. Petrus de Kock is thus entitled, The BRICS Brand – from economic concept to institution of global governance.
Click below to download