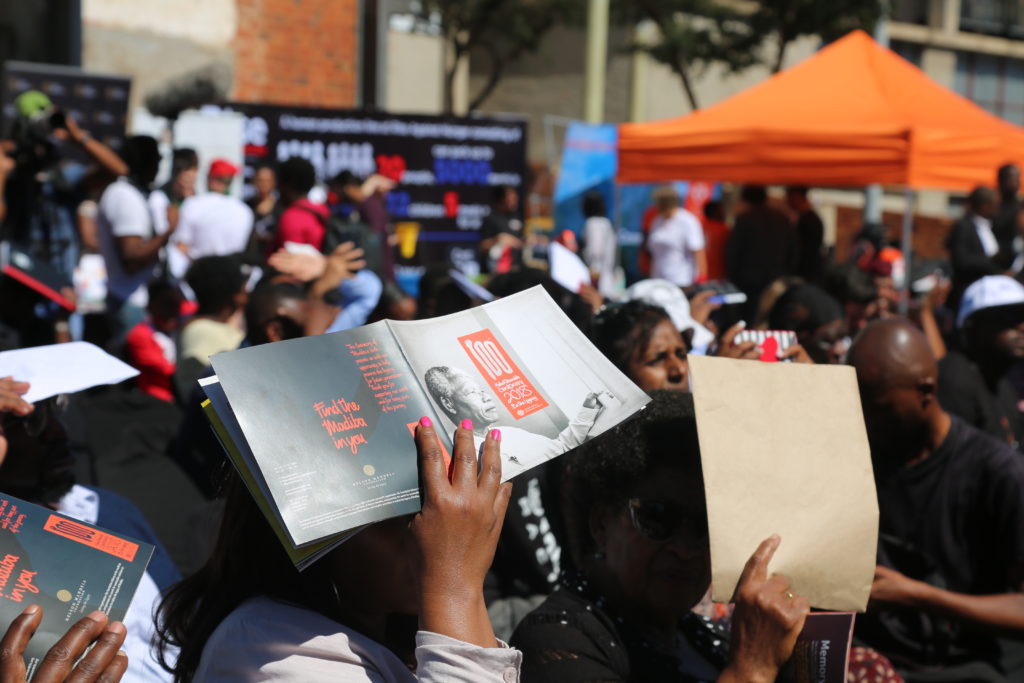 Yesterday 23rd April 2018, the Nelson Mandela Foundation launched Mandela Day at the Constitution Hill in honour of the legacy of Madiba and placing emphasis on the culture of volunteerism.

The Foundation invited all to play a part in building a society inspired by the values of the global icon – Nelson Mandela. The centenary celebration campaign prompts global citizens to take #ActionAgainstPoverty, inspire change and make every day a Mandela Day.

“It is important that we use the capabilities we have, wherever we are stationed in life, in a way that dismantles the unequal structures of power and protects the most vulnerable. All of us must commit to continuing Madiba’s work; fight poverty and inequality; strive to eradicate the growing scourge of racism; and reckon with the history of oppression”, said Mr Sello Hatang, Chief Executive of the Nelson Mandela Foundation.

Constitution Hill was bustling with various stakeholders who exhibited their respective Mandela Day initiatives, calling on citizens to sign up and play their part to contribute to Mandela Day and the betterment of the country.

The Nelson Mandela Foundation and the Obama Foundation also made an official announcement that President Barack Obama will deliver the 16th Nelson Mandela Annual Lecture under the theme “Renewing the Mandela Legacy and Promoting Active Citizenship in a Changing World” in Johannesburg at the Ellis Park Arena on the 17th of July 2018.

As a build-up to the lecture and Mandela Day, citizens are encouraged to make every day a Mandela Day. There are various initiatives for citizens of all races and ages to play their part and give 67 minutes of their time to the less fortunate and #ActionAgainstPoverty.

Some stakeholders took to social media to share their initiatives planned for Mandela day:

@HFHSouthAfrica 21m21 minutes ago At @NelsonMandela Centenary Celebration launch today. Book your team for July’s ‘100 Houses for 100 Families in Honour of 100 Years’ in KZN, JHB and CPT: build@habitat.org.za or call: +27 81 840 7968 #rememberingmandela #BeTheLegacy

@Absa 2h2 hours ago Like the Nelson Mandela Foundation, we believe in being an active force for good, which is why we’re proud to support them. And to mark the lead up to uTata’s 100th birthday, we’re inviting you to help write the new chapter of Madiba’s legacy. #TheNewChapter #MandelaDay