HEARTBEAT OF A NATION: EXPLORING A NATION THROUGH TEN BEHAVIOURAL GROUPS

The fifth group to be explored in the “Heartbeat of a Nation” behavioural group series, the Positive Enablers, comes after Brand South Africa shared the stories of the Independent Humanists, the Concerned Citizens, the Uncritical Loyalists, and the Celebrators of Achievement. As the Positive Enabler’s name suggests, the Positive Enablers serve as key enablers of many forms of active citizenship. Unlike the smaller and private social support networks of the Independent Humanists, or Concerned Citizens, the Positive Enablers’ interaction with- and contribution to people/community/society extend beyond their immediate personal networks. Their conviction in doing what is right for others, and for ones’ community, translates into proactive engagement with- and contribution to the world outside their immediate network of family and friends. The Positive Enablers do not see the world in a selfish and individualistic way, but they are guided by social awareness.

The actions and behaviours of the Positive Enablers illustrate their practical and goal orientated activism. Such activism may include a plethora of actions to help others through investing personal financial resources into causes or providing other forms of support for community initiatives, joining activist or other groups, and staying informed, or assisting with community policing. Interestingly, their deep consideration and care for society does not translate into a strong form of national pride for “being South African,” as only 43% of this group identify as Proudly South African.

This group makes up 10% of the population. The demographic composition of this group has changed over time. In 2017, the Positive Enablers were strongly represented by the white population group, and were found mostly in the metros across South Africa and in Gauteng Province. In 2018, rural and less affluent groups mainly from black groups, emerged as a dominant demographic group among the Positive Enablers. In 2019, the dynamic once again shifted with white representation in Gauteng once again coming through strongly. The latter also illustrates the dynamic shifts in South African society over time – as can be seen in movement between behaviour groups over time. Along with the “Activist Supporters,” a group that will be explored later in the series, the Positive Enablers hold the highest representation of white people at 13%. Compared to other groups, black people’s representation is low at 76%. Coloured people make up 8% of this group and Indians make up 3%. Overall, this group is skewed towards female, English speakers in the “45 and older” age category.

In 2018, the retraction of community participation by white members of this group is attributed to experiences of racism and gender discrimination. These experiences have pushed Positive Enablers away from interacting or feeling close to others. Nonetheless, expressing themselves through an affiliation with the “collective,” above individual desires and needs, is a defining characteristic of this group and therefore their identity is expressed within and through the strong social networks this group holds. Further, Positive Enablers love South Africa’s diversity.

The practical and goal orientated nature of this group make them quite independent minded. Their low dependence on government, and on anyone for that matter – makes this group unique among the ten groups considered in this series. This group does not see merit in “doing” through political participation, but will rather create solutions themselves. Such solutions do not have to involve any form of dependence on anyone, or the state. Trust for government is low at 56%, compared to 69% of this group that trust the private sector.

This group has a slightly higher than average amount of people who are employed at 50%, while 34% are unemployed and 15% identify as “not working.” Those who hold a post-matric make up a slightly higher than national average representation at 15% of the group while the number of matric holders is on par with the national average at 79% of the group. 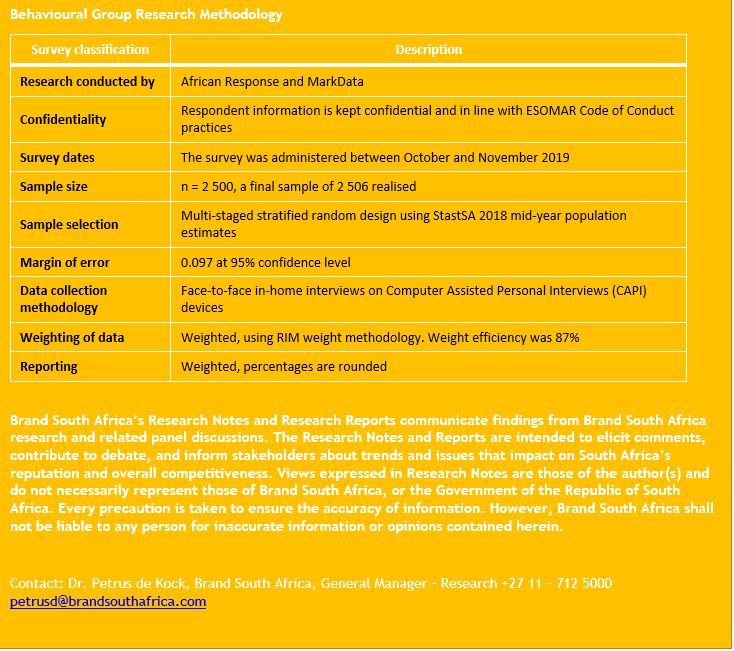