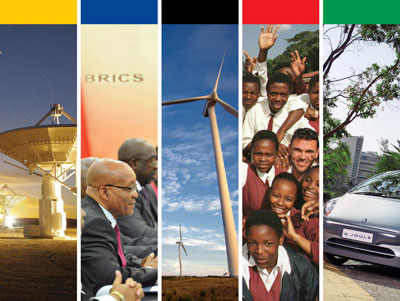 Through May and June 2011 Brand South Africa traversed the country, sharing its vision with all of the people of South Africa: a country enriched by its diversity, innovation, possibility, sustainability and ubuntu.

With the unique combination of highly developed first-world economic infrastructure and a vibrant emerging-market economy, South Africa is an investors’ dream.

South Africa is a diverse nation, with a population descended from the Zulu, Xhosa, Ndebele and Swazi people; the Sotho-Tswana, who include the Southern, Northern and Western Sotho; the Tsonga; and the Venda. Other important influences are Chinese, Asian, British, Dutch, German, French and other European immigrants.

South Africa is not short on innovative thinking, whether it be creative, scientific, industrial, or otherwise.

The country is already well known for developments such as the world’s first oil-from-coal refinery, the speed gun used to calculate how fast a cricket ball travels, and the first successful human heart transplant, performed back in 1967.

IMF praises ‘impressive’ performance
Commending South Africa’s “impressive” economic performance in recent years, the International Monetary Fund (IMF) has forecast that the economy will grow by 3.2% in 2010 and 4.5% over the medium term, with the gap between actual and potential growth closing by around 2014.

Sustainability is a concept that’s gaining ground in South Africa in many sectors of the economy. Manufacturing, transport, agriculture, natural resources and construction are just a few industries where sustainability wields a strong influence.

It has been 21 years since Nelson Mandela walked to freedom, 17 since the magical days of April 1994 when millions of South Africans cast ballots for the first time to make him our first truly representative president. The world watched in trepidation, then in wonder, as South Africa emerged from its generations-long nightmare of racial oppression as a new, united democracy.

Partners for Possibility selected as finalist of the global WISE Awards