Background:
It would seem as if two tectonic shifts, one in the somewhat bizarre world of global finance (post the Global Finance Crisis), and the other in the realm of the so-called 4th Industrial Revolution, have finally made its way into thinking on competitiveness. In a major step change from its long established methodology that underpinned the Global Competitiveness Index (GCI), the World Economic Forum’s (WEF) 2018 edition of the index introduces a range of new concepts and attributes geared to measuring competitiveness, and ultimately productivity, to respond to the challenges of the time.

In order to understand and interpret the implications of the new rankings of South Africa, for example, it is at first necessary to understand why WEF embarked on a revision of its methodology. These can be divided into two, being: one, of global political-economic nature, and on the other – due to digitisation and the emergence of the 4th Industrial Revolution.

On the one hand WEF argues that the global financial crisis indicates that such events have long-term negative impacts on productivity. The 4th Industrial Revolution on the other hand impacts on the outlook of societies due to disruption of existing business models, and the potential negative impacts innovation can have on society.

In order to provide more insight on how societies, and states should respond to the challenges of preventing new financial crises and melt-downs, and to govern the societal effects of innovation, the 2018 GCI identifies new attributes to fit the purpose. In broader terms, before we look at some of the details of changes brought to the 2018 GCI methodology, WEF recommends four attributes of successful economies in the early 21st century, these being:

1. Be Resilient: introduce measures to prevent financial crises and mass unemployment;
2. Be Agile: do not resist change, and be able to adapt to new modes of production of goods and services;
3. Build Innovation Ecosystems: encourage and support innovation at all levels;
4. Adopt Human-Centric approach: ensure that policy and innovation actively protect human centric development approaches.

Changes to the WEF GCI Methodology
The WEF GCI 2018 presents a revised methodology to measure national competitiveness, and productivity in the context of the fourth industrial revolution. In order to provide competitiveness insight, and national preparedness for adoption of new technologies, modes of production, and the challenges/opportunities of the 4th industrial revolution, WEF in 2018 introduced new pillars of measurement, the twelve are:

The methodology takes as its point of departure the idea that productivity ultimately drives human development and prosperity in the long term.iii Of the original 98 indicators that informed the GCI, 34 have been retained, and 64 new indicators introduced.
It is therefore clear that more than two thirds of the indicators that measured national competitiveness/productivity, have been revised.iv This illustrates the extent to which the two major societal forces (financial instability and the disruptive effects of the 4th Industrial Revolution) have impacted on WEF’s methodology. 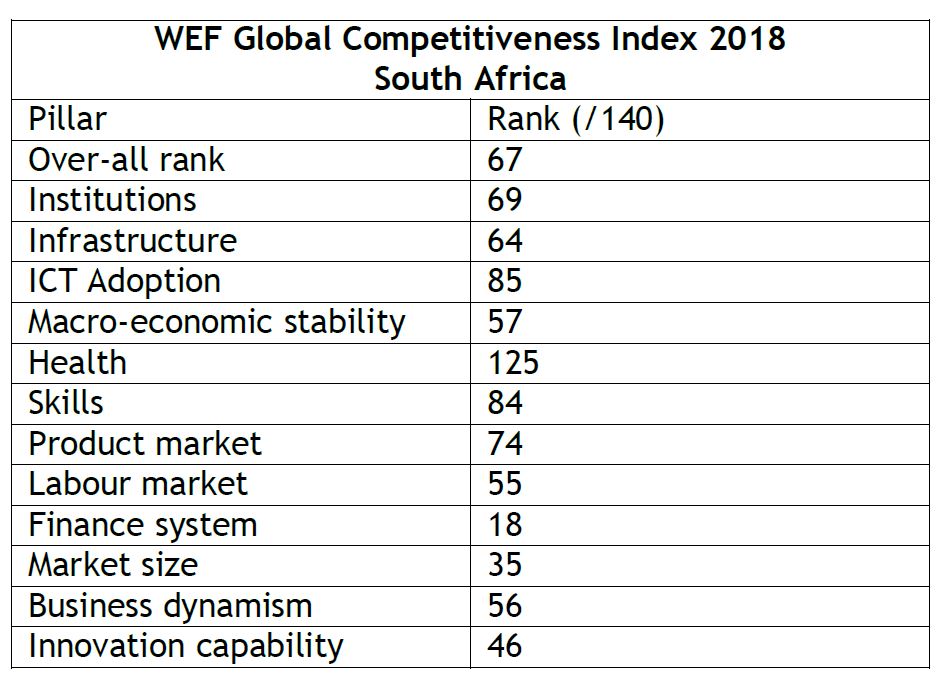 Notable issues:
 Based on the new WEF GCI methodology it is clear that South Africa still ranks extremely well in terms of: Market size, Finance System, and Innovation Capability;
 In the African context Mauritius is first at 49/164, and South Africa second at 67th, Morocco, third at – 75th, Tunisia fourth at – 87th, and Botswana at 90th making it the fifth most competitive African nation;
 Of the BRICS nations, China is first, at 28th, Russia second at – 43rd, India third at – 58th, and Brazil fifth at – 72nd in over-all ranking;
 South Africa’s national strengths can be found in the Finance System ranking 18th, it’s Market Size at 35th, with strong performance in Business Dynamics at 56th, the Labour Market at 55th (which looks much more promising than rankings achieved through the previous methodology), with a relatively good ranking for Economic Stability at 57th;
 In the context of the 4th Industrial Revolution it is notable that South Africa ranks 46th for Innovation Capability. As noted above, being agile and capable to adapt to technological change and innovation, is critical to productivity and survival in a period of rapid change.

Much further analysis remains to be done to unpack detailed sub-indicators in the GCI to better profile and understand the South African Nation Brand’s capability to remain productive and competitive in the 21st century economy.

HEARTBEAT OF A NATION: SOUTH AFRICAN BEHAVIOUR AND THE EVOLUTION OF NATIONAL IDENTITY IN...